What does rhino conservation mean today? 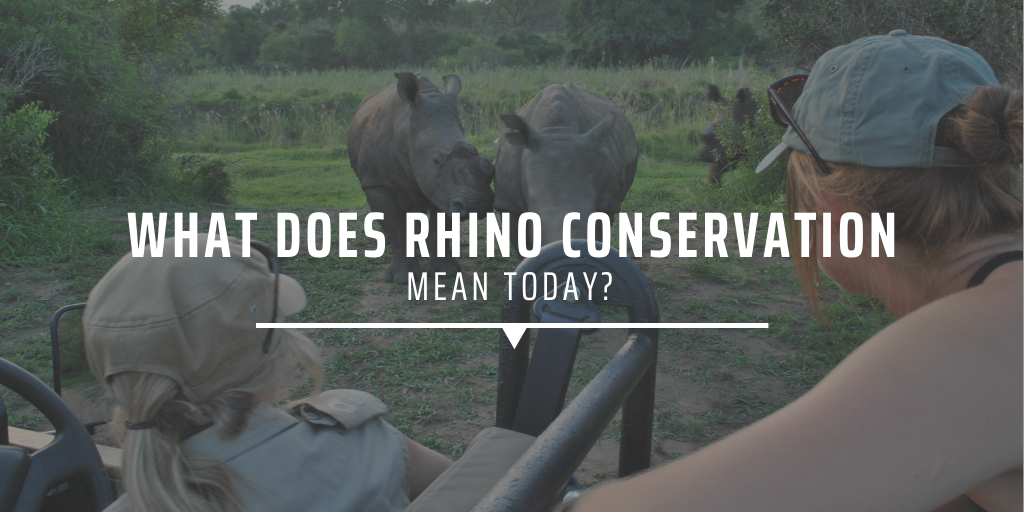 Over the past decade, the number of rhinos being poached has soared, pushing some species to the brink of extinction.

Now, many people are wondering what is being done, and how they can get involved to protect one of the Earth’s oldest living mammals.

There are five surviving species of rhino, two of which (the black rhino and the white rhino) are native to Africa. The remaining three species (Javan, Sumatran, and Indian rhinos) are all native to Asia.

Four of the five species are on the International Union for Conservation of Nature (IUCN) Red List of Threatened Species.

The Javan, Sumatran, and black rhino are listed as critically endangered, while the Indian rhino is considered vulnerable. The white rhino is listed as near threatened, making it the only species that doesn’t qualify for threatened status.

The decline of African rhinos

Less than 200 years ago, over one million rhinos roamed the African continent.

But, by the beginning of the twentieth century, relentless hunting by European settlers cut this number to less than 500,000. 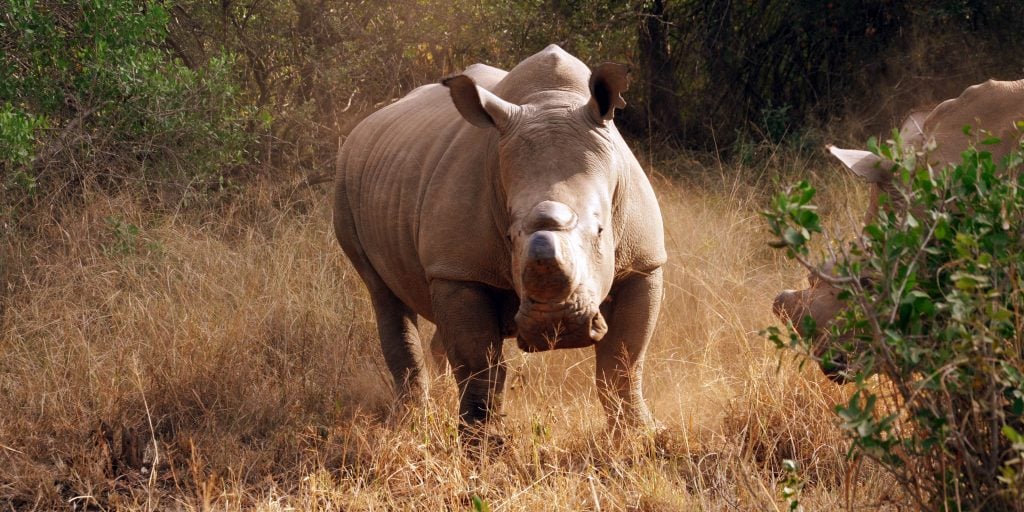 The population continued to decline steadily until the 1970s, when growing demand for rhino horns (a prized ingredient in several East-Asian traditional medicines) caused a dramatic spike in rhino poaching.

Despite an international ban on the trade of rhino horns, poaching continues to this day.

The result? The creatures that once roamed much of the African continent are now mainly found in four countries – Zimbabwe, Kenya, Namibia and South Africa.

Within these countries, very few rhinos live outside of national parks and wildlife sanctuaries.

South Africa, which has the largest population of rhinos, is arguably the most important country for rhino conservation.

Since 2014, the number of poached rhinos has been steadily declining in South Africa.

But, neighbouring countries are reporting an increase in rhino deaths, indicating that poaching activities are moving elsewhere.

Why are rhinos a target? 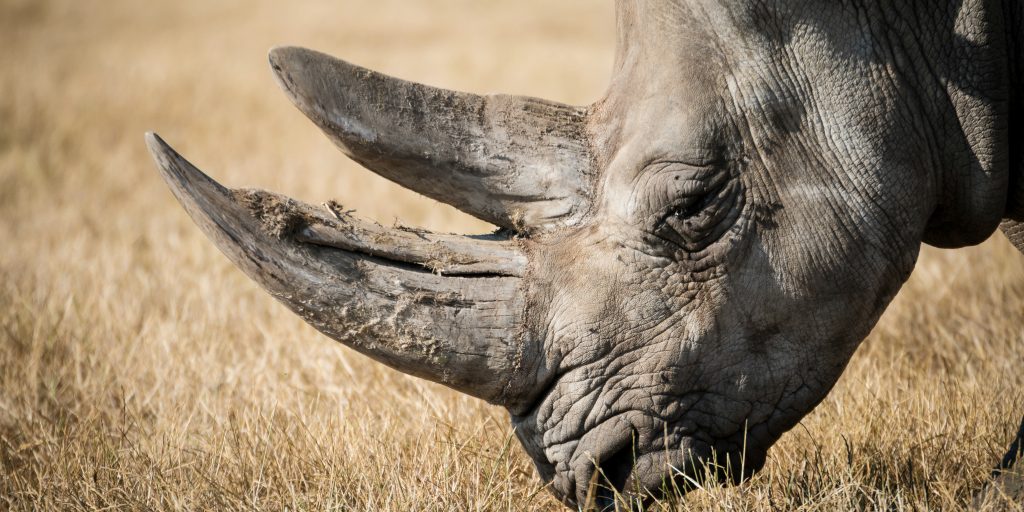 Aside from big game hunting, rhinos are primarily killed for their horns.

Rhino horns have been used in traditional medicines across parts of East Asia for centuries.

They are claimed to help treat various ailments such as fever, gout, food poisoning and headaches.

The horn is ground into a powder and dissolved into boiling water for consumption.

The horns are made of keratin and are structurally similar to a horse hoof, turtle beak, and even human fingernails.

The rhino horn is an important part of the animal’s anatomy. Rhinos use their horns for several purposes, such as protecting themselves or their young and digging for water.

And much like our fingernails, rhino horns will continue to grow throughout the animal’s life.

Whether or not rhino horn has any medicinal value is up for debate. Studies suggest that there is very little, if any, medical usage for rhino horns.

Still, the placebo effect can be powerful, and as long as people believe that it’s working, the trade will continue until a better alternative is offered.

Is dehorning the answer? 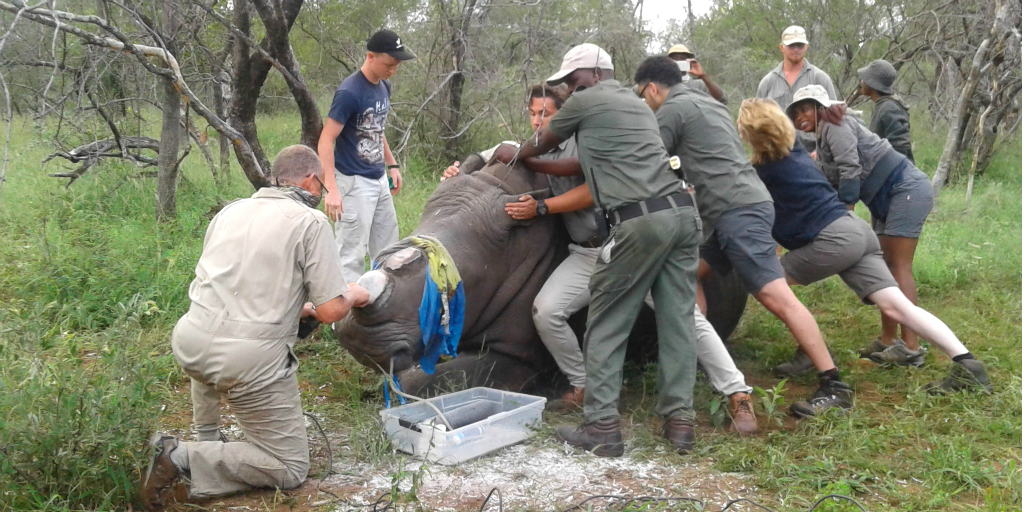 GVI participants assist with the process of dehorning a black rhino at Karongwe Private Game Reserve in Limpopo.

A rhino without a horn is monetarily worthless, so one way of attempting to deter poaching is removing the horn from the animal. This is known as dehorning.

The problem with dehorning is that the horn is not removed 100%. Just under 10% of the horn is left inside the head of the rhino, which means poachers can still make some money from that rhino.

There are other reasons why poachers may kill a dehorned rhino.

They track the animals using the same methods field guides do, and it may take several hours or even days of tracking to find the animal. For these poachers, time is money, so they sometimes kill dehorned rhinos so no time is wasted tracking an animal that has little value to them.

There doesn’t seem to be any one right or wrong way to deal with rhino poaching – or any other form of animal poaching, for that matter.

But, the support of communities bordering national parks and wildlife sanctuaries is essential in the effort to conserve the rhino. 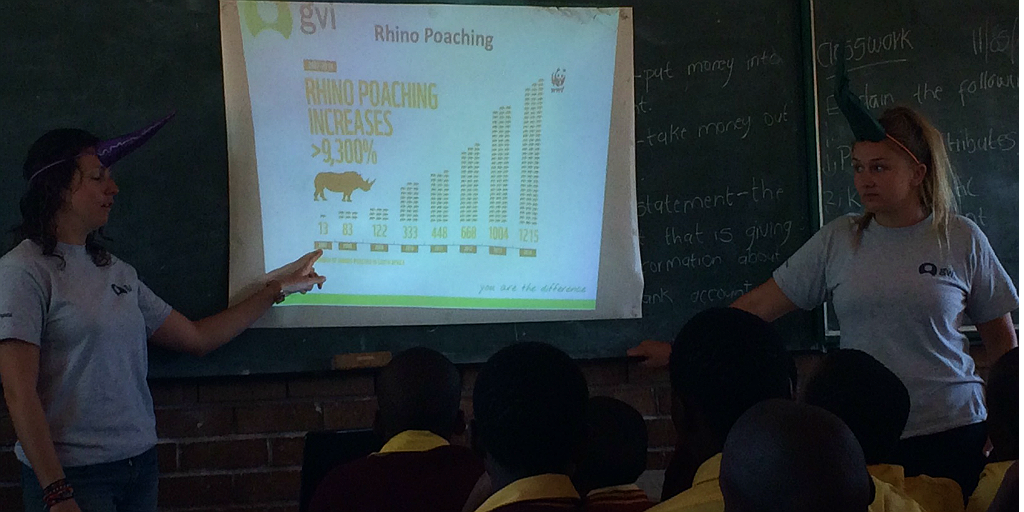 Rural villages around national park boundaries are often the starting point for poachers looking to access the parks without being noticed. They try to entice villagers into poaching with the promise of financial security.

But once these poachers have what they came for, they move on to the next village, leaving very little money behind, if any.

By working with and developing the communities bordering the parks and reserves, we can assist them to establish themselves as national park outposts – providing employment possibilities for years to come.

There is no one-size-fits-all solution to stop rhino poaching.

The main effort right now is to train more field guides and rangers.

Well-trained guides combine their knowledge of the local area with their extensive skills in animal tracking to keep one step ahead of poaching operations.

Once they have identified high-risk areas, more can be done to protect the animals.

Programs such as GVI’s Field Guides Association of Southern Africa (FGASA) field guiding internship place emphasis on the anti-poaching aspect of the job, and produce highly qualified guides who can take their expertise to other parks and reserves around the world. 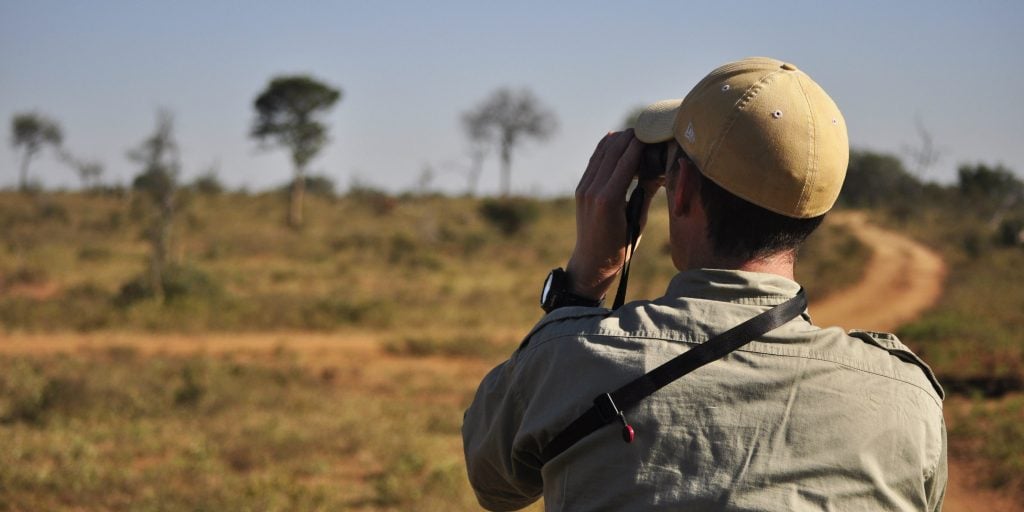 Dogs have been man’s best friend for millennia – from protecting villages from wolves, to sniffing for explosives.

The amazing nose and tracking skills of a dog can be used in several ways for wildlife conservation.

In the right conditions, a dog can smell and track a human from up to one kilometre away. They can also be trained to smell and find weapons that may have been hidden.

Should a dog catch the scent of a person, their high speed and agility allows them to chase off suspected poachers. The rangers and field guides can then track these individuals via other methods, such as helicopter, car, or even on foot.

The use of detection dogs (known as K-9 units) to deter and apprehend poachers has increased over the past few years.

Despite being a low-tech solution, the use of dogs has proven incredibly successful.

In South Africa, dogs have been reported to have been involved in 80% of poaching-related arrests.

Could technology be the key? 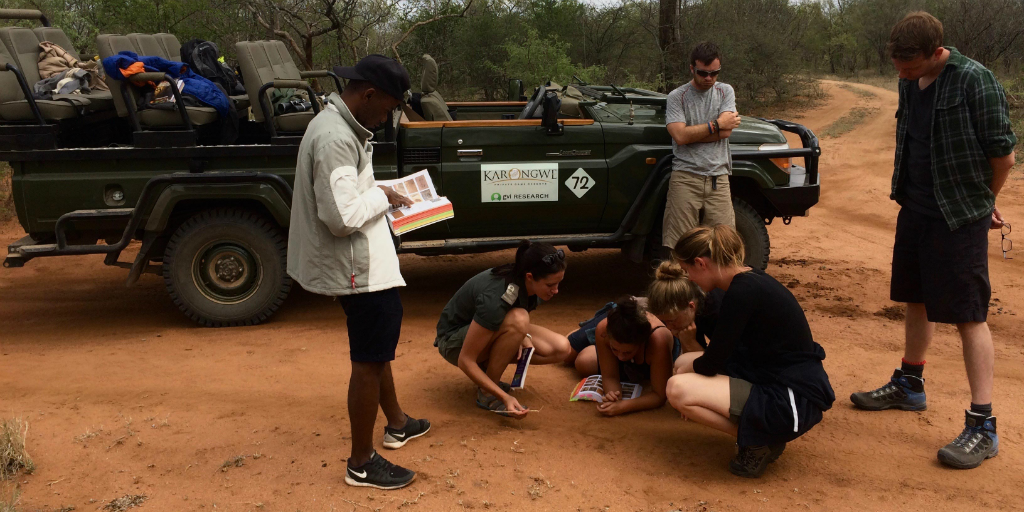 The advancement of technology means that we have new ways to detect poaching attempts.

Drone trials have been held at several national parks and wildlife reserves across Africa.

As 80% of poaching takes place at night, drones with night-vision cameras could prove useful for finding suspected poachers hiding among tall grass or in bushes.

Although the results from the trials have been mixed, as technology continues to advance, there could still be a lot of potential for drone use – combined with other efforts – to stop poaching.

What’s the outlook for rhinos?

Despite a lot of negative media attention about the increase in rhino poaching, there is good news too.

With only 100 (a crude estimation) individuals left, the white rhino was on the brink of extinction just 100 years ago.

Today, there are more than 17,000 white rhinos living in national parks and reserves, demonstrating just how effective wildlife conservation can be.

Sadly, the species most at risk of extinction are the Javan and Sumatran rhinos – with both species numbering fewer than 100 individuals in the wild. 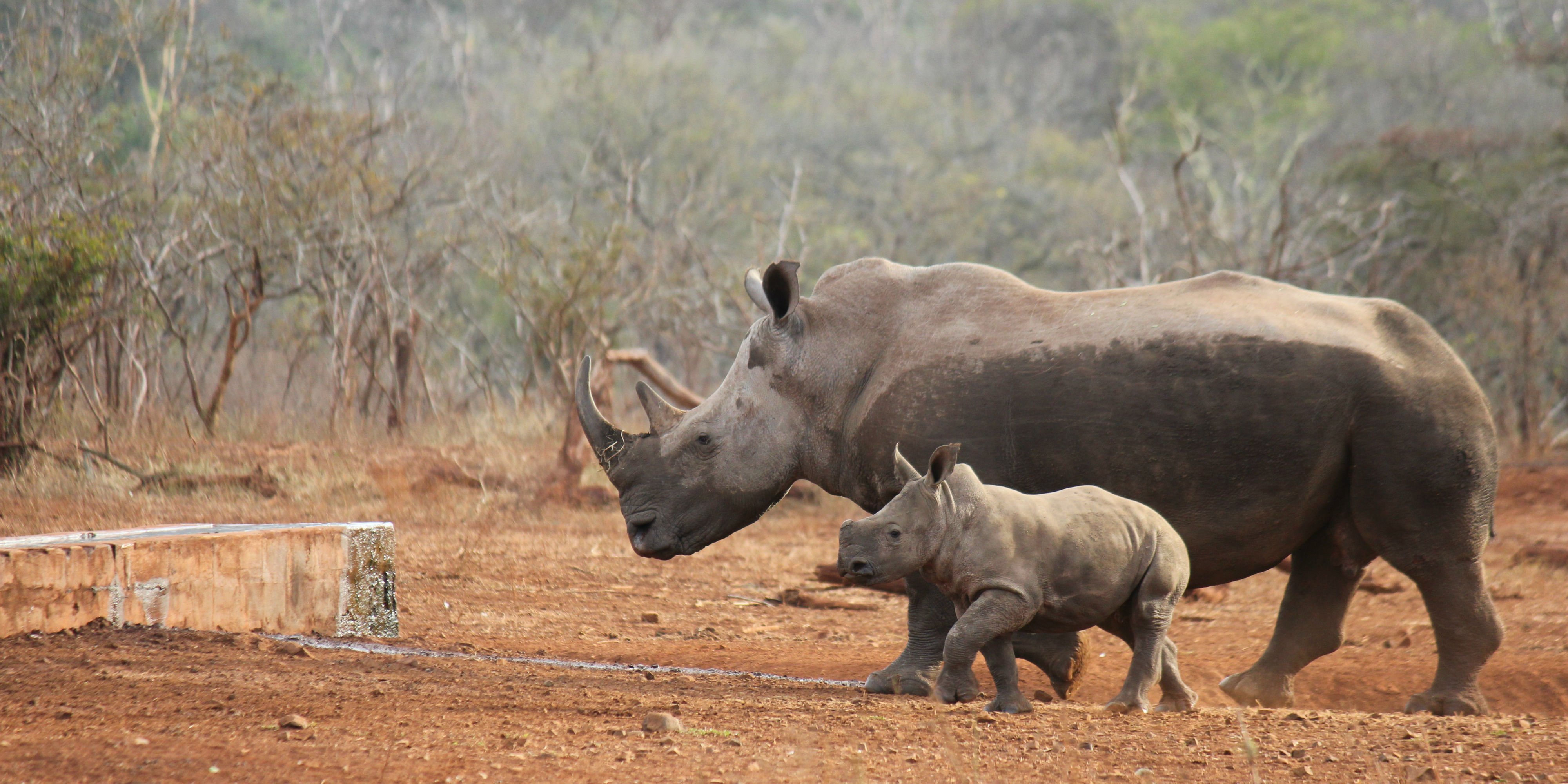 Although poaching continues to be a threat for these species, their main threat is habitat destruction – which is happening at a tremendous rate across Indonesia, the last stronghold for both of these species.

With such low numbers of both Javan and Sumatran rhinos, it’s easy to think they are doomed, but we shouldn’t give up hope just yet.

The Indian rhino was once reduced to a population of fewer than 100 individuals. Years of hard work protecting their habitats and preventing poaching has helped the species recover to more than 3,600.

If you want to join the cause and assist in conserving rhinos, there are several things you can do right now.

The expertise and skills of well-trained field guides still seems to be the best way to deter rhino poaching for now. So if you’re looking to begin an exciting new career, why not head to our website and sign up for the FGASA field guide internship?

Find out more about GVI’s volunteer and internship opportunities where you can contribute towards rhino poaching awareness, and make an impact in rhino conservation today.