Beneath the surface of the ocean lies a hidden ecosystem – coral reefs. Coral reefs are like underwater cities where thousands of marine species live, but they are disappearing, fast.

These underwater ecosystems house the largest variety of life besides rainforests. They form part of the “blue highway” – from our rivers to our oceans – the path many marine species travel throughout their life cycles. 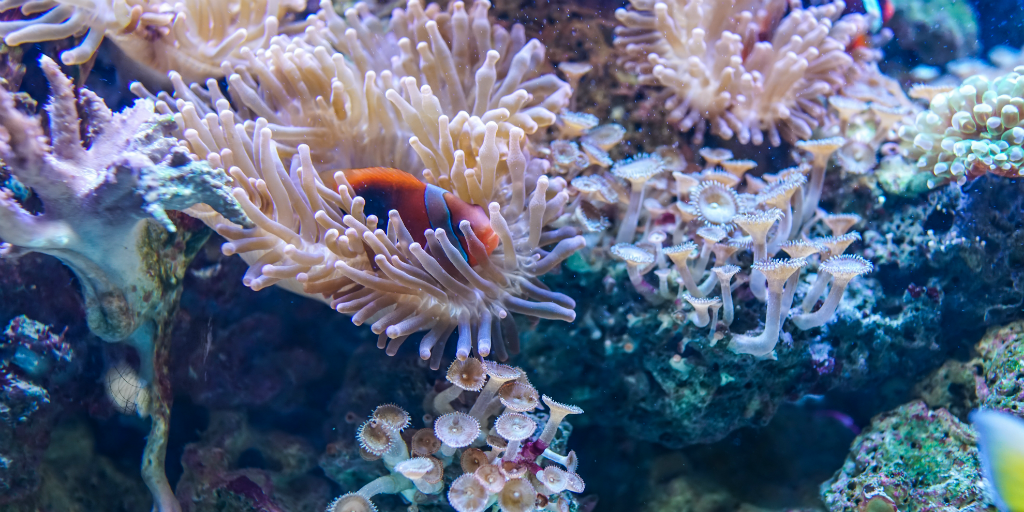 Just like our cities, coral reef ecosystems are noisy places. You can hear hawksbill turtles munching on sponges, the chorus of fish getting louder at sunrise and sunset, and snapping shrimp’s crackling sonic booms as they hunt.

Large fish like gropers and manta rays come into fish-cleaning stations to get a cleanup, much like we take our cars to a car wash.

Grey reef sharks patrol the depths of reef drop-offs where the lights and colours of the coral city fade into the vast, deep-blue.

But, unlike human-made cities, which are mostly growing and expanding, coral reefs are disappearing. And those that remain are at risk of becoming bleached, weathered, and devoid of life.

As a result, the International Union for Conservation of Nature (IUCN) ranks coral reefs as one of the most threatened ecosystems in the world. 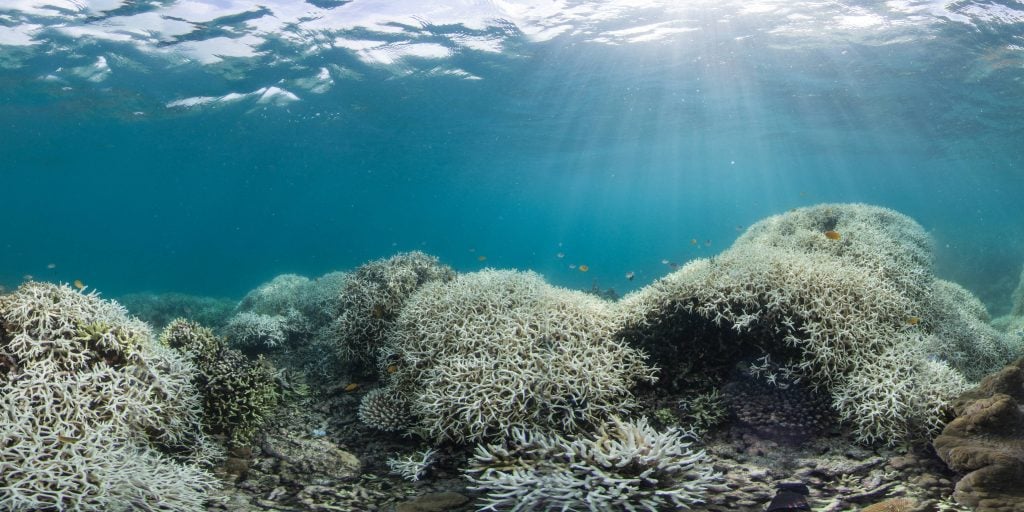 Why are coral reefs disappearing?

Coral reefs are disappearing because of a mix of local pressures and climate change.

Local pressures include overfishing, caused by commercial agriculture; pollution; nutrient enrichment of reef waters, which is harmful to coral reefs; and coastal development.

But these local pressures are small compared to the effects of climate change,  the biggest driver affecting coral reefs.

Coral bleaching, increased intensity and frequency of large storm events, and ocean acidification are some of the ways climate change is affecting coral reefs. 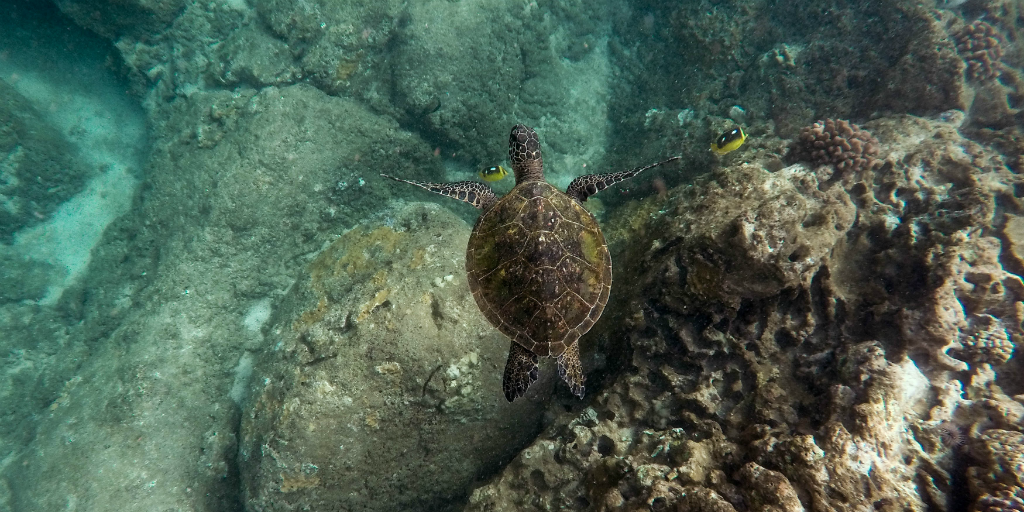 Every year, several of our major cities around the world are exposed to record-breaking heat waves because of climate change. This is no different for coral reefs.

They are hit by marine heat waves, the effects of which are devastating. These are known to cause coral bleaching.

Coral bleaching is when the tiny, colourful marine algae that live inside corals die. They die because the water becomes too warm for them.

Without these algae living inside them, the coral cannot get energy to grow and reproduce. They too then die and leave behind a white skeleton.

As shown in the documentary “Chasing Coral”, some corals vividly fluoresce just before they die, looking a little like a city skyline at night, in their last effort to save themselves.

The glowing pigments are a chemical sunscreen designed to protect the corals’ algal inhabitants from the sun’s intense rays. In this instance, it’s triggered by the warmer waters. 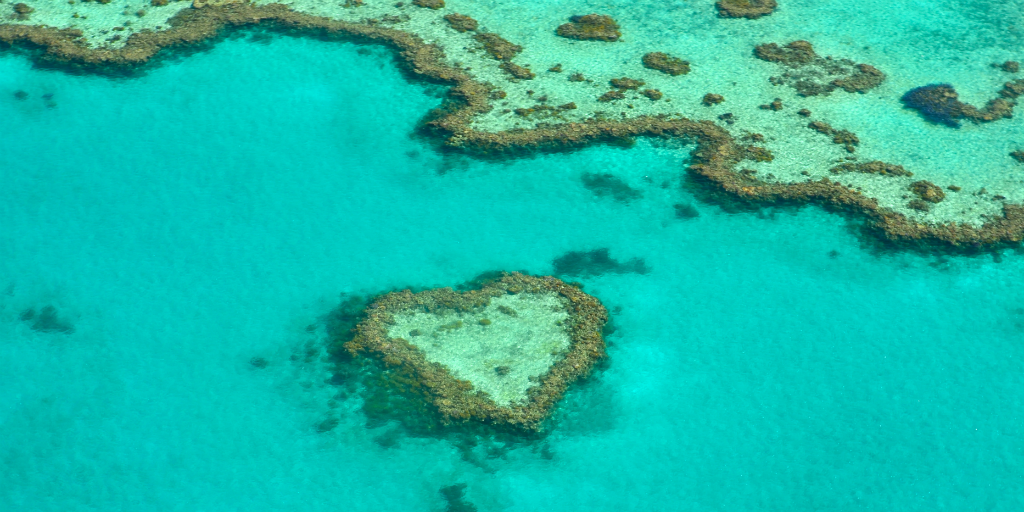 The United Nations Educational, Scientific, and Cultural Organisation (UNESCO) World Heritage Centre listed the Great Barrier Reef as an iconic underwater megacity. It’s so large it can be seen from space.

Because of these events, over 61% of the Great Barrier Reef has now been severely bleached at least once.

Coral bleaching isn’t restricted to Australian reefs. It’s happening worldwide. Research published in Science magazine has shown that the percentage of reefs being affected by bleaching per year grew from 8% in the 1980s to 31% in 2016. Can you imagine over one-third of the world’s cities being hit by a major event each year? 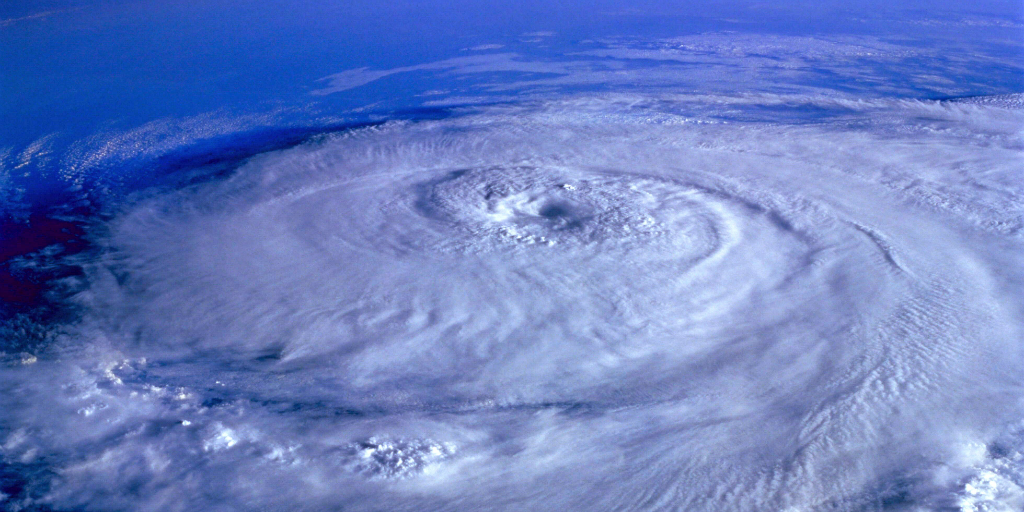 In 2005, the world’s eyes were on New Orleans as Hurricane Katrina devastated the city. Big storms like Katrina affect our coral reefs too.

We can rebuild quickly after storms impact our cities. But for reefs, this isn’t true. Scientific studies show it can take between ten and 25 years for the reefs to recover.

Coral reef communities have coexisted with hurricanes and cyclones for thousands of years, but this balance is being shifted. Because of climate change, these storms are becoming more frequent and intense, leaving less time for corals to recover. 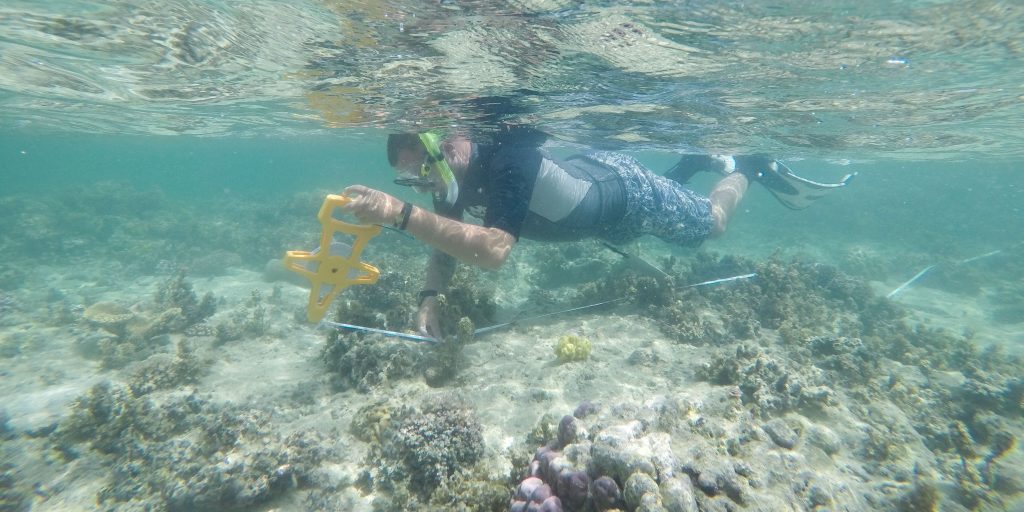 Our oceans take up and dissolve the excess carbon dioxide we release into our atmosphere. This is making our oceans more acidic.

Coral skeletons are made from calcium carbonate, which is eaten away by more acidic waters. With ocean acidification, it’s possible that new coral growth will be limited and old corals will become weaker. This means our reefs will be more susceptible to the impacts of natural disasters, like storms.

How do coral reefs sustain us?

Although coral reefs only cover 1% of the ocean floor, an estimated 25% of the world’s fish species spend parts of their lives in these underwater cities.

The world’s general population, especially many small coastal communities in developing nations, rely on these fish for food.

Reefs protect those of us who live on the coast or islands from natural disasters, like tsunamis, by regulating the waves, and thus, the current too. 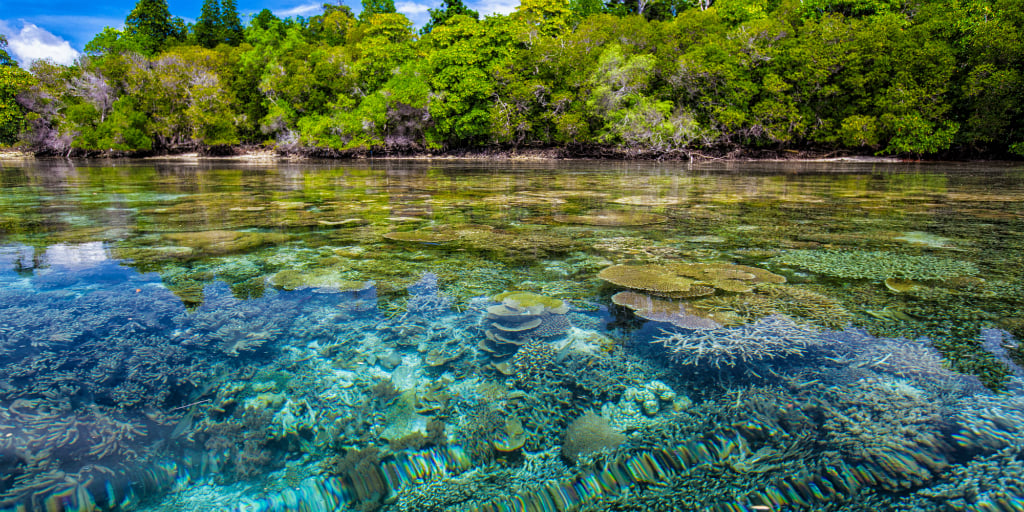 Coral reefs also support tourism, as they are a big attraction for scuba divers. There are the delicate branches of giant gorgonian fans, vivid arrays of colourful corals, flocks of large predatory fish like barracuda, and tiny neon-coloured fish the size of your thumbnail.

Not only that, but coral reefs are a modern-day medicine cabinet. The plants and animals that live in these underwater cities are proving to be excellent resources for new medicines that could treat cancer, arthritis, bacterial infections, Alzheimer’s and heart disease.

Most importantly, healthy reefs mean a healthy ocean, and the ocean gives us the oxygen we need to breathe.

Michael Crosby, a marine scientist, recently told Business Insider that “Up to 80% of the oxygen you are breathing right now comes from the ocean. It doesn’t come from the land. In order for you to continue to breathe, you have to have a healthy ocean”.

What can I do to help the world’s coral reefs? 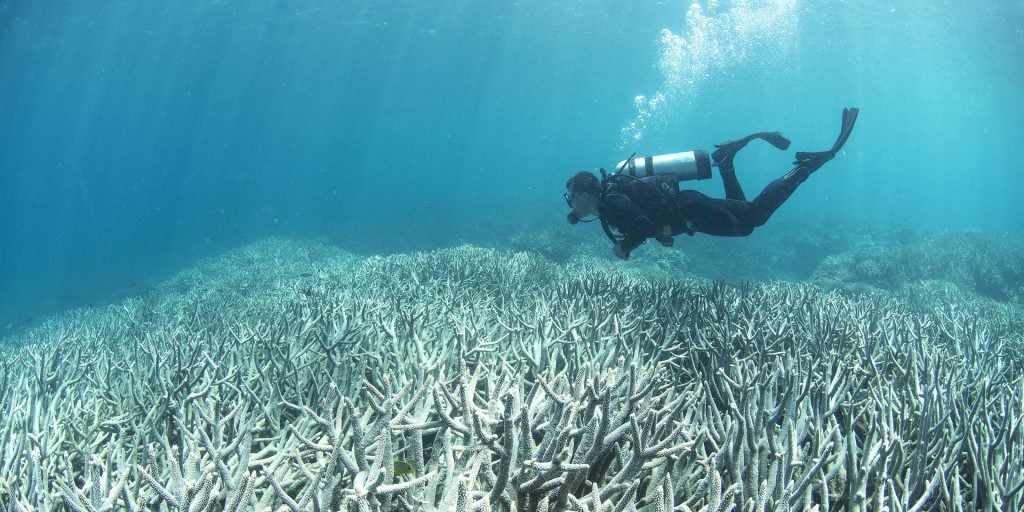 You can live your life in a way that reduces both local pressures on reefs and your own carbon footprint. Here’s what you can do. 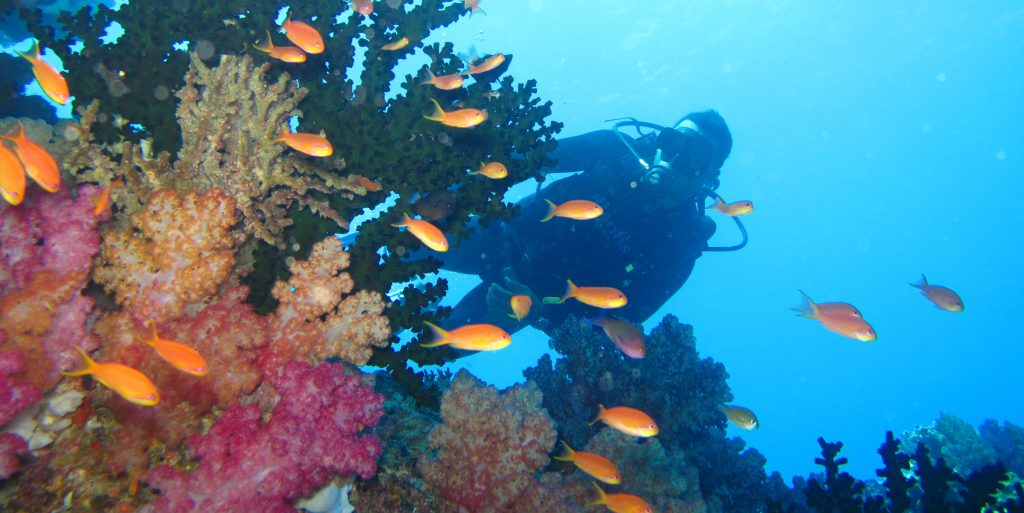 If you want to help coral reefs as well as experience them, you can volunteer on one of GVI’s coral reef focused marine conservation expeditions.

If you want to make an impact on the well-being of the world’s coral reefs, browse GVI’s marine conservation programs aimed at coral reef conservation.