The Varying Surveys of Curieuse Island 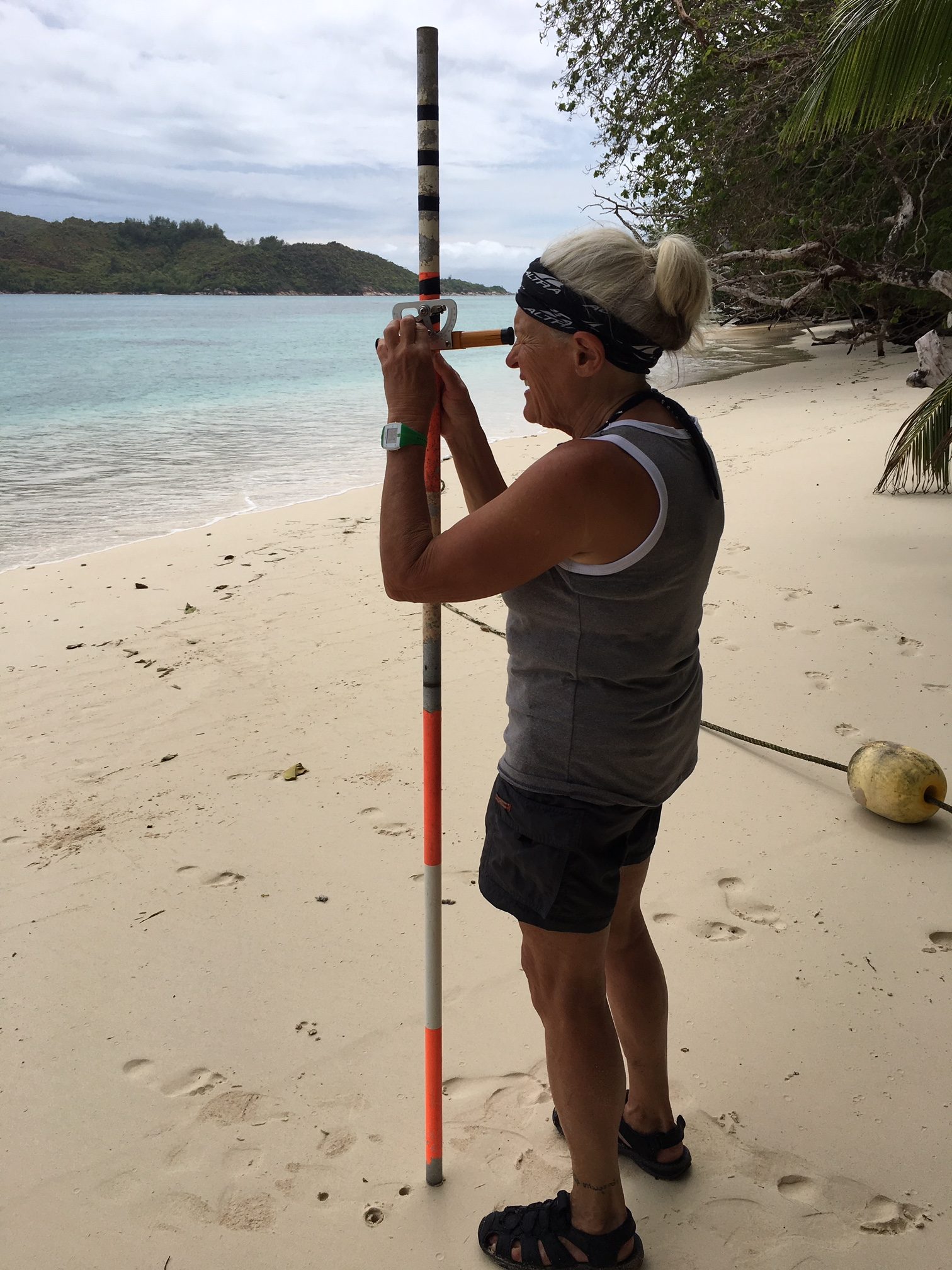 Some days can be very exciting at Camp Curieuse. Take this past Wednesday for instance. After a long morning doing beach profiling and turtle nest excavation at Grande Anse, we trekked out again at 5:00 pm to go ‘sharking’. This involves stretching out one or two nets in the shallow water of the north ‘turtle pond’ and waiting for about an hour and a half in thigh-high water for baby sharks (hopefully baby lemon sharks) to swim into them, so we can scoop them up, tag and examine them and then release them.

For the last couple of weeks we hadn’t caught any lemon sharks, a couple of baby black tips, but lately ‘sharking’ had definitely been on the slow side. So we were surprised and excited when as soon as we stretched out our nets, in swam a baby lemon shark. We scooped him up and as we headed towards the boardwalk to do the tagging etc., two more swam into the same net. We quickly brought those in, tagged, measured, weighed and released them, along with our first catch. The nets went out again and within another ten minutes or so, two more were caught. As we brought those in, one got out of the dip net, but we had baby lemon shark number four! We processed and released number four and then went out with the nets again feeling pretty upbeat and hopeful. We were definitely on a roll. At 7:00 pm, just as we were bringing in the nets, another lemon shark swam in. We rushed to scoop him up, but this guy got the better of us. He turned around and swam away from the net before we could reach him. But it had still been a very successful and exciting evening of ‘sharking’!

Beach profiling was our next task for the day. Beach profiling involves charting the changing contours of the beach to track the amount of erosion over time, and is important as this affects turtle nesting and the health of the mangrove forests. So today (the very same Wednesday), at 8:00am, Grace and I hiked over to Grande Anse with abney level, compass, two long poles, tape measure and packed lunch in hand. It had rained pretty heavily the night before so the trail to Grande Anse was slippery in places, and so slow going down through all the leaves. We made it in just over an hour, unpacked our gear and looked for our first starting point – a green painted line on a specific tree along the beach. We found said tree and were assigned our tasks – two each – to sight with and read the dial on the abney level (difficult until you’ve done a few readings), and using the compass (to line up the poles), the poles themselves, and the tape measure (to measure distance between poles). All very confusing at first but we sort of got ourselves organized and started on our first of five profiles. Three here on Grande Anse and another two on Anse Papaie, the adjoining beach.

Our progress was slow, as we figured out how to read the level, get the poles positioned correctly and measure between poles right down to the water’s edge, and in further to the beach ‘drop-off’ point. Also, this first profile happened to be at a point where there were a lot of beach debris and rocks along our measurement line, making progress even slower! Wading out of the water after this, our first of five profiles, we figured we might be beach profiling all day.

By the third profile, however, we were working more as a team and surprisingly, we became a lot more proficient! The beach points where we needed to do profiles also seemed to get ‘easier’ – not so many obstructions and ‘lumps and bumps’. So we did finish all five and headed back to camp, with a sense of accomplishment! 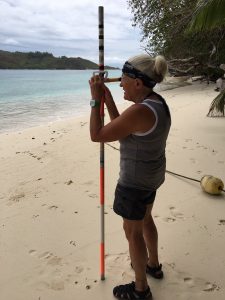