GVI Curieuse has a long standing relationship with the Terrestrial Restoration Action Society of Seychelles (TRASS). It is a local voluntary organisation based on the neighouring island of Praslin. Its main aim is to rehabilitate areas of degraded mountainside, by nurturing endemic and native tree species until they are ready to be planted, and then during the rainy season planting the maturing saplings. 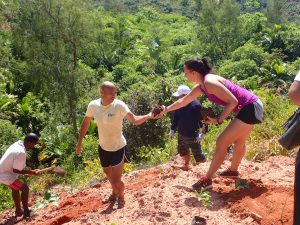 In July 2015 the GVI staff and volunteers attended a potting event at the newly constructed plant nursery at Fond B’Offay just down the road from the Vallee de Mai UNESCO World Heritage Site. The task for the day was to take recently germinated seedlings of a variety of local tree species and transplant them into larger containers in which they could continue their early growth in a controlled environment. The aim was to pot as many as possible and our grand total for the day for 1060!

Since then the seedlings have been growing in the nursery lovingly looked after by the local TRASS volunteers, and they are all now at a stage where they are ready to be planted on the hillside. The potting of the seedlings was the easy part. As they grow and get larger they obviously become rather bulky and heavy, and the planting sites are all near the tops of the mountains where there are no roads! However with the rainy season being well underway there was no time to lose to follow up and finish the job, and the planting season soon got underway. 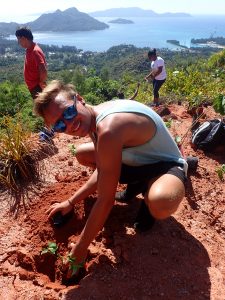 The site chosen for the first batch of saplings was La Hauteur mountaintop close to the town of Baie St. Anne. On the 28th of January a team of 12 GVI staff and volunteers joined local TRASS volunteers to begin the long hike up the mountain. This was no mean feat, as the day was hot and crates of saplings are not exactly light, but everyone made it to the planting site with their precious cargo. Then came the task of digging holes in the hard packed soil and carefully placing the seedlings in before covering them with soil. Once on the mountaintop it took about two hours to plant out the day’s consignment, at which point everyone could take a very well earned rest before heading back down the hill to return to Curieuse. 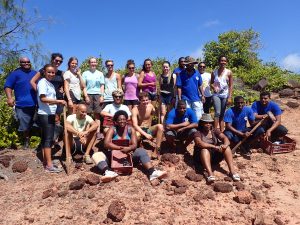 A total of 64 saplings were planted on this first session, but of course there were plenty more where they came from, so several more planting sessions took place in the following weeks. With a busy camp of volunteers we were able to increase the total quickly, keeping going until all 1060 were in the ground and beginning to provide all the benefits that vegetation provides, as well as making progress towards turning the islands of the Seychelles all green again.