My adventures in Laos- Episode 1

Well, where and how to start?  Probably the best thing is to give you a bit of background information about the project on which I’ll be working for the next four weeks.

It’s run under the auspices of GVI, a global organisation which operates projects in many developing countries aimed at supporting them in their efforts to improve the health and wealth of their citizens and their access to education and employment.  This project in Laos specifically has within its scope 4 of the 17 UN Development Goals: good health and well-being, quality education, gender equality and decent work and economic growth.

My fellow volunteers are here for different durations ranging from 2 weeks to 6 (I’m here for 4) and I am the only one of my intake who is on the Women’s Empowerment Project.  The others will be spending all their time teaching English to novice monks and children whereas I will spending some of my time doing that but also I will be working with young women (early teens upwards) to open their minds to the opportunities they have available and choices open to them, increase their confidence and self-esteem and help them become independent people.

Exactly how I am meant to do all that remains a mystery but my training starts tomorrow!!  What I do know is that I will be working on the project out of a buffalo farm set up in the country about 45 mins drive from Luang Prabang by two women, one Australian and one American, where they make a range of cheeses from buffalo milk.  I sincerely hope milking the buffaloes won’t be part of my job description but one never knows! 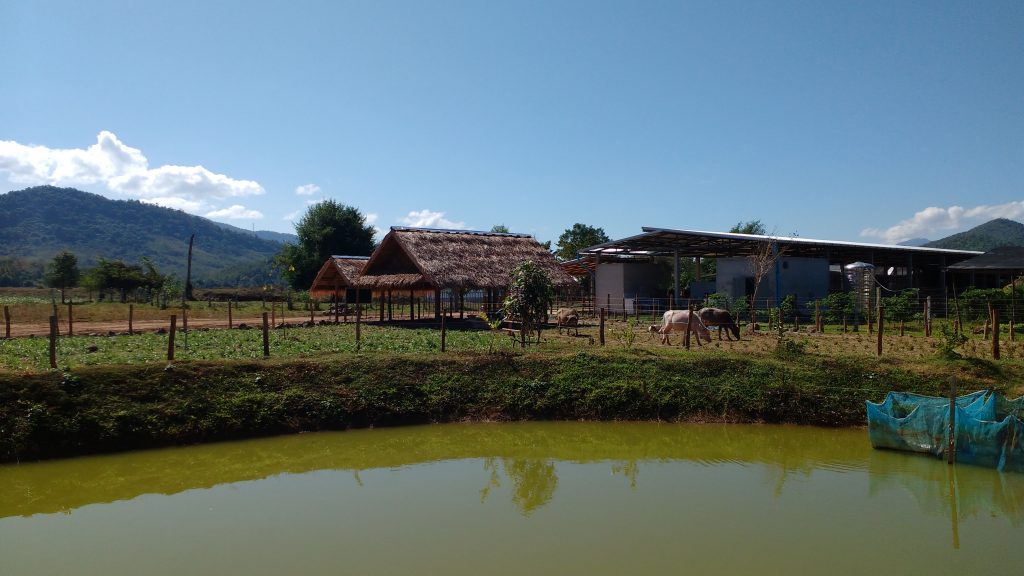 My early impression of Luang Prabang (LP) is of a small but quite wide-awake provincial town where a reasonable balance exists (for the moment anyway) between cultural accessibility and authenticity. It is mercifully devoid of the dreaded high rise buildings which dominate larger Asian cities and there is a pleasing mixture of “traditional” buildings and smart, modern ones.  Street signs are not plentiful so navigating the town for someone such as me with quite low spatial intelligence is not without its challenges, but the signs that do exist are at least in Lao and either English or French.

Crossing the road is not for the faint-hearted (pedestrian crossings exist but are generally considered to be decorations in the road) but one just has to assume that Lao people do not use their vehicles as assault weapons and they mostly have brakes.  Of course, to assume that all motor bikes have lights would be the height of foolishness.

The markets are no different from anywhere else in Asia but I have never seen such extensive displays of textiles, mostly fashioned into the traditional Lao skirt – a sinh – which is a wrap-around calf length number, widely worn by women irrespective of the work they do, even farming, and although many younger people no longer wear it by choice it is de rigueur for professional women such as teachers.  Yes, you’ve guessed it – as from tomorrow I will be wearing a sinh every day.  I have to say I do look quite a pill in one but when in Rome and all that.

Sunday morning I was relieved to hear that I won’t be required to milk the buffaloes at the farm, but instead will be teaching English to the girls who are working on their, focussing on vocational vocabulary (i.e. that which they will find useful in their work), so, I guess I’ll be swotting up on my farming knowledge – I knew my addiction to The Archers would come in useful at some time or another!

Also, the project staff had done their homework so I have been asked to develop some classes to help some girls who have learned to make things start up their own business and manage their finances so they can set themselves up as market traders.  Oh, and some of the girls would like some help with their French so would I work with them?  It looks as if I won’t be sitting around twiddling my thumbs anyway!

Well, I’ll sign off for now as my working day starts tomorrow at 7.45am.  Popgunmai (see you later).