Let’s start with the good. The island and the landscape are beautiful. You can walk around the whole thing in ten minutes. I cannot wait to get in the water it is so blue and clear. We stopped at a small island about five minutes from Caqalai before arriving and it had the most beautiful coral just underneath the welcoming bridge and Caqalai is supposed to have better coral. 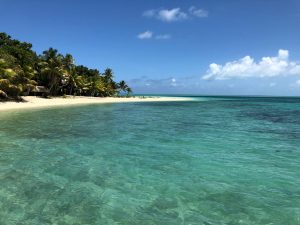 Leleuvia Island next to Caqalai

The people I’ve met are so great so far. Everyone seems to be from the UK, except for one guy named Riley; he was with me on my flight from LA. Even the people that aren’t part of my program have all been incredibly kind and happy. I’m just so excited to get in the water.

Now here’s the bad news. Today was the hottest day I think I’ve ever been a part of. I have been dripping sweat beads pretty much all day. There is no way to be cute in this temperature, im constantly just wiping sweat off of my face. On top of the hotness I am THE MOST sunburned and in lots of pain. The cold showers are actually preferable to hot ones.

Oh, and I have to live with boys.

Anywho, I’m writing this while I listen to Bon Iver and try to help myself forget that I’m laying in a pile of my own sweat. I’m really excited to be able to swim tomorrow.

I have one question: what possesses a rooster to yell like that for just two hours straight every morning? I mean, I’ve seen and heard that roosters do that but never had to actually try and sleep through it. He was “cockadoodledoing” from 4am-6:30am. Well I guess I wasn’t even sleeping. It was too hot and loud.

Today we started with breakfast which consisted of “porridge”. I was sitting here thinking that porridge was something I’d never seen before. Turns out it’s just oatmeal. Then we went through a couple of lectures. The first one was about all the poisonous things that can hurt you while in the water. Then after this lecture we did our swim test which consisted of a 200m swim and a 10 minute float. Luckily, I passed. Then we went to a traditional Fijian church service. I found out that Methodist is one of the main religions in Fiji brought over when it was owned by Britain prior to 1970. At this church they sing these amazing a cappella songs, and without instruments manage to stay in tune; it was probably a 6 or 7 part choir! I didn’t understand a word because it was all in Fijian except for the prayer they said directly to us. Either way, it was beautiful. 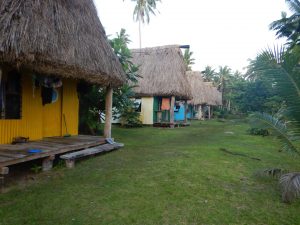 Our “bures”, houses, where we sleep with a few other volunteers

When we returned back to Caqalai (the service was on Moturiki) we listened to more lecture. This time about Fijian culture. Apparently, Fijians used to be cannibalistic but you’re not supposed to bring it up. Then we had dinner. It was this little curry dish. Then I had to get up and tell some things about myself. We all picked a question out of a jar and had to do whatever it said. I had to hum my favorite song until everyone guessed it. It was hilarious because no one could guess it and I just stood up there humming away.

After the dinner shenanigans I took the best shower ever. I shaved my legs and then braided my hair. It was a great end to day two.