This February, the team at Curieuse Marine National Park began an exciting and important mission: to determine where the juvenile sicklefin lemon sharks of Curieuse call home. Understanding the critical habitat of a species is vital to any conservation efforts and management actions. Put simply, critical habitat represents the areas and environments in which an animal spends the majority of its time. Collecting this type of information on a wild shark is no easy task; however, we were more than ready for the challenge. The theory behind the active tracking of a shark is relatively simple; you implant an acoustic tag into a shark, and then follow it around with a hydrophone and receiver to track its movements. Easy, right? 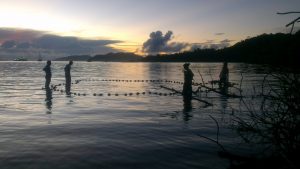 The active tracking of sharks requires a number of components: dedicated people, a healthy shark of suitable size, surgical equipment, an ultrasonic acoustic tag, receiver, hydrophone, a boat, and a great deal of patience. At 05:00 on February 9th, with all of our equipment and eager team at the ready, we went out in search of sharks within the Baie Laraie mangrove forest and adjacent seagrass bed. After fishing for hours with gill and seine nets, we came out empty-handed. This wasn’t particularly surprising, as a low number of juvenile sharks are caught at this time of year compared to peak reproductive season over October and November. We weren’t discouraged, though after two more early morning sessions went by without a shark, we began to wonder when we would finally begin tracking. 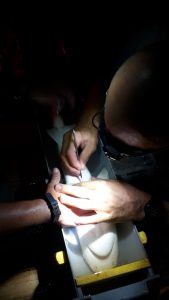 Then – at 05:53 on February 16th – as our American volunteer Kalina and Science Co-ordinator Pete were silently holding a gill net in waist-deep water, it was on. A shark suddenly thrashed wildly in the net next to Kalina. Unflinchingly, she remembered her training, flicked up her headlamp and scooped up the flailing elasmobranch with precision whilst shouting “LEMON!” – our team’s call for a landed shark – which was met with much cheering from shore through the darkness. 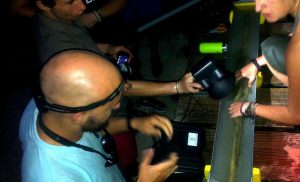 The shark was immediately scanned for a tag, which revealed that she had been caught 3 times prior. With her measurements taken, she was then flipped upside-down in a trough full of water. The team watched closely as Pete made an incision just under the pectoral fins and slipped the acoustic tag – about the size of an AA battery – inside the body cavity, and then quickly completed the sutures to close the wound. Following a quick signal check of the tag, the shark was ready for release. The shark was observed in a small sea pen before being released into the wild. Excited interns were immediately trained in the use of the tracking equipment, and we were pleased to locate our shark – now named Kalina – swimming gracefully with an acoustic tag pinging away inside.

This exciting project has even attracted young SNPA rangers Dwayne and Gino to join us on tracking sessions, where they have been learning valuable skills and insight alongside our interns related to the park that we all aim to protect. Our staff and interns have also taken this opportunity to learn from the rangers as well, taking in Creole names and local knowledge about the numerous marine species we encounter during tracking sessions.

Since the tag implantation, Kalina has been tracked regularly within Baie Laraie and has increased in weight in a subsequent capture. This data, along with the sharks we tag in the future, will help provide an estimate of critical habitat for juveniles of this species within Curieuse Marine National Park. Critical habitat estimates will allow our partners, the Seychelles National Parks Authority (SNPA), to manage this population using the best available science.