Bula Vinaka! Hello! My name is Jules Power, I am 47 years old from the United Kingdom doing the 3 month Marine Conservation volunteer program at Caqalai. To start off my 2nd month here we celebrated Fiji Day! Fiji Day is on October 10th every year, celebrating the Independence declaration from Great Britain in 1970.

The day on base began with normal duties and project work. With several rehearsals of the traditional Fijian Meke dance already under our belt (or sulus in Fiji) there is an excitement in the air about our performance for later. Dane, our Country Director and Jill, our Regional Director joined us for the rehearsals. The Meke: Fijian song with rhythm and actions which tells a story. Fijians have traditionally used the Meke as a way to share their history to new generations, especially telling stories of war. Our story was about catching breadfruit from the tree, (not letting it land on the ground where it will go bad) and the mongoose intimidating its enemy grasshopper. The last verse shows the dwarfs (spirits) dancing. The singing and dancing was led by Laisa and Tai and the beat on the drum was led by Master. Learning the Meke was a lot of fun and the singing was contagious with volunteers humming the tune for days to follow! 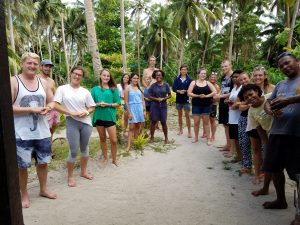 We spent the afternoon doing a Caqalai volleyball competition, round robin style with all of the volunteers, GVI staff, and local staff from the neighboring resort. The competition was tight and highly competitive, with bragging rights won by the victors! Fijians love to play sports and take great pride in their athletic abilities. It was fun to try and play at their level!

A celebration ‘lovo’ prepared by cooking in an underground oven for dinner with local dishes of cassava, dalo, rourou, and marinated chicken-delicious! Then it was time for the final Meke performance that took place in the Kava Hall where we got to show off our new dance moves to local guests and our chief guests, Claire and Toni, along with our newly acquired fighting clothes with charcoal and oil on our faces and bodies to scare away enemies. We had such a blast and can’t wait to write a story specifically for Caqalai telling the story of the island and GVI! 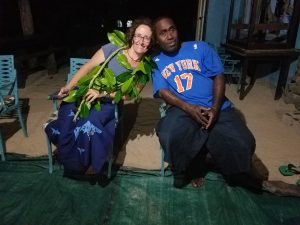 We had so much fun!

Why should we save endangered species?
Read More
Eight scuba diving jobs you can get as a PADI pro
Read More
The top eight volunteer projects for this year
Read More
Apply Now
Enquire Now
Call Back Request