The bulk of our activities thus far has been presentations on GVI policies, Thai culture and language, teaching English, and conservation training. That’s not to say it’s been insipid, or even that dry. In fact, one activity we did today got me thinking a lot about what it takes to really create sustainable conservation of this planet, and, more specifically, turtles. We were given the task of creating a comprehensive plan for a new turtle conservation site shortly after we discussed the limitations and problems with turtle conservation as we know it. A couple of those defects are: negative behavioral changes caused by placing solitary animals in tanks with many others of its kind, and disrupting the food chain of beaches where mothers place their eggs. However, it’s completely worth it. Turtles in the wild have a survival rate of less than 1% in the wild, while at the sites they have a 40% chance to make it to their release age at 6 months. With all the species endemic to Thailand either Endangered or Vulnerable, the ends justify the means.

My group consisted of myself, a Computer Science major, Ben, a math and CS major, Virginia, an engineer, and Veohnti, and Economics major. Together we devised this grandiose idea for a facility that would be located at a beach cove that had been restored by an army of volunteers. This revived beach and ocean would be the grounds for a giant, natural turtle tank. We’d rope off the cove, and allow visitors to snorkel on the outskirts, peering in on the flourishing ecosystem of replanted coral, seaweed (for green turtles), sponges (for the Critically Endangered hawksbill), and various fishes. These tourists would help fund our facility, and more ambitious ideas. Our facility would have fish growing in the salt water cove that would then be transferred when large enough to a small tank where their wastes would act as fertilizer for veggies & fruits which could be harvested and sold by local villagers. We would have labs on site that would conduct research with local fisherman to develop fishing hooks, nets, and traps that would reduce bycatch of turtles. This would help raise awareness within their community, as well as reduce long term population decreases. We could show local schoolchildren the facility, and teach them about the importance of conservation.

After presenting this idea, and watching everyone else’s presentations, it became clear that there are a few common themes that will unlock the key to our planet’s future. The first is manpower. Cleaning up an entire cove, and running a giant facility would take plenty of eager people, many of which would need to be volunteers. Second, we need to innovate and create exciting solutions to problems we might not yet have. Sure, food can be grown in a regular farm, but what happens when farmland runs out? The idea for our cove was ambitious, but I don’t think it does us much good to sit on our hands and wait for us to realize we are way behind on another major problem.

We’re not even a week in, but I think it’s safe to say that I’ve already started to do some learning. Rain or shine… Well, probably rain, we’ve got to get to work! 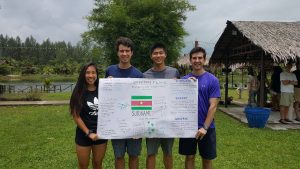 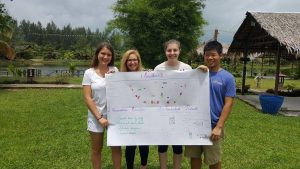