01727 250 250   Apply Now
Announcement
TRAVEL UPDATE: We're open! Where can I go?
Megan
Colborne
Megan Colborne is a content writer from South Africa with a passion for travel and adventure. Megan has an honours-level degree in Journalism specialising in writing and editing, as well as digital media. Before starting at GVI in 2019, she spent a year working in Spain, and travelling to other European countries like Amsterdam, Switzerland, Ireland and France. Megan is also an alum of the GVI Writing Academy.
Chiang Mai Study Abroad Wildlife Conservation
0 Likes
Share
Facebook
LinkedIn
Twitter 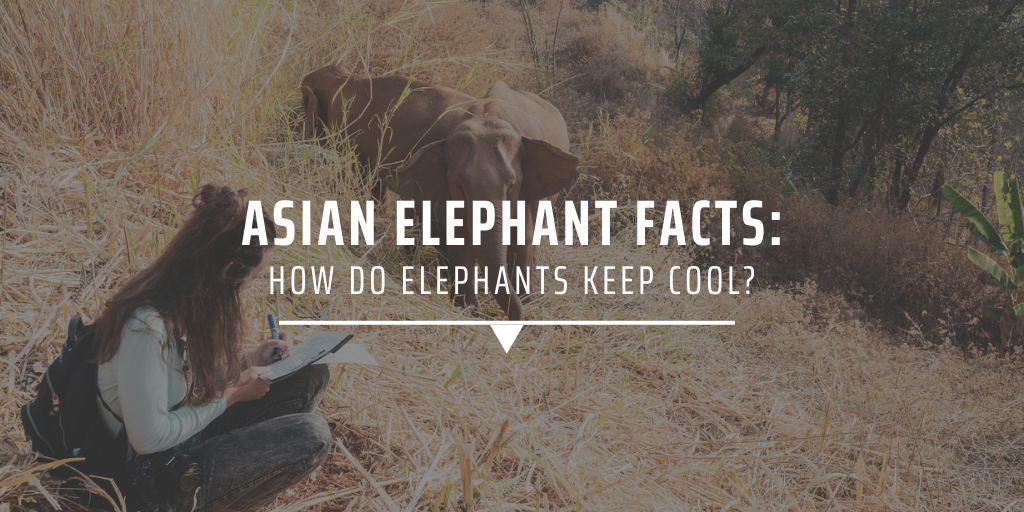 Sweating. It’s how our bodies manage temperature, cooling us down when it’s too hot. But unlike humans, elephants don’t have sweat glands to help keep them cool on those scorching summer days in Thailand. So, how do elephants keep cool?

When looking for answers about the behaviour and characteristics of animals, we need data. So we observe and monitor animals to gain a better understanding of why they do what they do.

But how do we gather data to find out these facts about Asian elephants?

Well, when you work with Asian elephants on GVI’s Chiang Mai internships, you’ll have the opportunity to observe, monitor and record data on the natural behaviour of Asian elephants every day. As a GVI intern, you’ll also be able to lead your own research project. And this is exactly what GVI alum Sophie Whipp did. The aim of Sophie’s internship research project was to determine if existing data is representative of the current behaviours and needs of the elephants.

Typically, GVI volunteers in Chiang Mai will head out into the mountainous forests of Northern Thailand in the morning and collect data on the activities and behaviours of these Asian elephants. However, Sophie’s aim was to find out if the activities displayed by the Asian elephants in the morning were the same as those displayed in the afternoon. This is because the weather is much warmer in the afternoon, which led Sophie to believe that the elephants may display more cooling behaviours than they would earlier in the day.

Data was collected in the afternoons during the dry season between the months of January and March, when the overall temperature was rising.

So, what are the cooling behaviours of Asian elephants?

With the absence of sweat glands to regulate temperature, Asian elephants have evolved their own efficient cooling mechanisms, or adaptations. These can be divided into two categories – physical and behavioural. What physical adaptations allow Asian elephants to cool themselves down?

Although Asian elephants only have sweat glands in the cuticles of their toenails, their skin has an extremely high permeability. This means that water can actually evaporate through the skin, allowing the skin to cool without the need for sweat glands.

The wrinkled, uneven and textured skin of elephants also plays a major role in cooling by allowing any moisture from their environment to stay on the surface of their leathery skin for longer, rather than evaporating off straight away. One of the best physical cooling adaptations of both African and Asian elephants are their ears.

In fact, elephants can lower their overall temperature by more than ten degrees celsius by simply flapping their massive ears to create wind.

The backs of their ears are also covered in a network of capillaries and veins that carry blood.

So, how exactly does this keep Asian elephants cool?

Well, when the warm blood from the rest of the elephant’s body reaches this capillary network and is filtered through the ears, it’s cooled by the wind and released back to the elephant’s body. This helps to regulate their overall body temperature.

Because of this, it can be quite a common sight to see an elephant facing the wind with its ears extended. This increases the surface area of the ears, allowing the cool breeze to access all the veins and capillaries found in the ear.

On a hot summer’s day, it’s not unusual to hear your dog audibly panting from the other room. This is a cooling mechanism for them to regulate their body temperature.

But with elephants breathing through their trunk rather than their mouth, they aren’t quite able to achieve this temperature relief by simply panting.

The trunk does however play an important role in regulating the overall temperature of elephants. This is because the trunk is the physical adaptation that’s used for dusting and spraying – two of the behaviours that help Asian elephants keep themselves cool. What behavioural adaptations allow Asian elephants to cool themselves down?

Asian elephants are crepuscular animals, meaning they are most active around dusk and dawn, when the temperatures are usually much cooler. During these “active” hours, Asian elephants will usually spend their time foraging for food, moving around and socialising.

Dusting is the act of elephants scraping the ground to collect sand, soil or dust, curling their trunk around it and then throwing it onto their body.

According to Sophie’s research, Asian elephants dust at temperatures above 13 degrees celsius, with the frequency of dusting increasing as the temperature increases.

Although this is a behavioural cooling adaptation that’s used by elephants during the warmer hours, dusting could have some social meaning too.

Similar to dusting, mudding involves the elephant covering its skin with mud, either by rolling in a pool of wet mud or using its trunk to spray the body with mud. This helps these majestic mammals to regulate their body temperature but may also hold other functions such as:

Similar to both dusting and mudding, elephants also use spraying as a way of cooling themselves down throughout the day.

They will often find bodies of water such as a river or lake, collect the water in their trunks and, as the name suggests, spray it all over their bodies. Since the temperature of the water is a lot lower than the water in their cells, it speeds up the process of cooling.

Why is data collection important?

Without the monitoring, data collection and research project’s like Sophie’s, we wouldn’t know these Asian elephant facts that help us to better understand the needs of the species. And in turn, without this knowledge, we wouldn’t be able to effectively conserve and spread valuable information about these magnificent land mammals to members of the public.

GVI’s elephant conservation internships give you an opportunity to work closely with an elephant herd, traditional elephant-keepers and the local community in an effort to promote sustainable eco-tourism.

So, if you’re keen to make an impact and develop your own research project to increase our access to Asian elephant facts, sign up to our Conservation Internship with Elephants in Thailand today.