A sinking fort in the desert 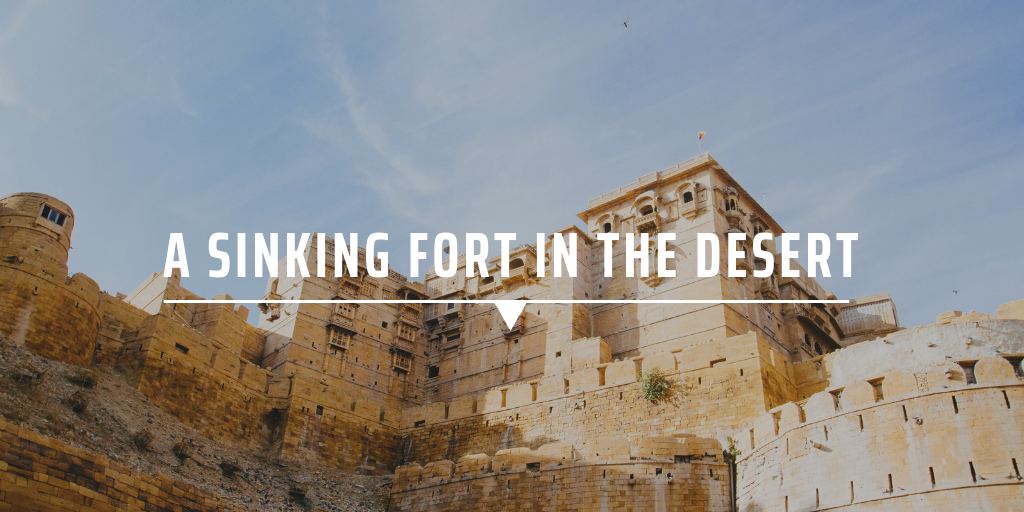 Rising 350 feet from the sand and flanked by 99 bastions, the Jaisalmer Fort is a formidable presence in the Thar Desert of India. The fort, built in 1156, was an established trade stop of the Silk Road.

Yet the past forty years of increased tourism has taken its toll on India’s last living fort, with cracks beginning to appear in the sandstone walls that have resisted sandstorms and earthquakes for over eight centuries.

Ten years ago, I visited the fort, which resembles a sandcastle forged from the desert around it. Today, environmental factors and unsustainable tourism practices mean that the fort faces an uncertain future.

The Delhi–Jaisalmer express train wheezed into Jaisalmer four hours late, and deposited weary travellers who had spent almost a day aboard.

“Do you know what does IST means?” asked my travel companion, an Agra local who had slept on the bunk below.

“India Standard Time,” I replied hesitantly, feeling like it was a trick question.

“No!” he laughed, widening his arms. “It means India Stretching Time!”

Admiring the fort from afar in Gandhi Chowk 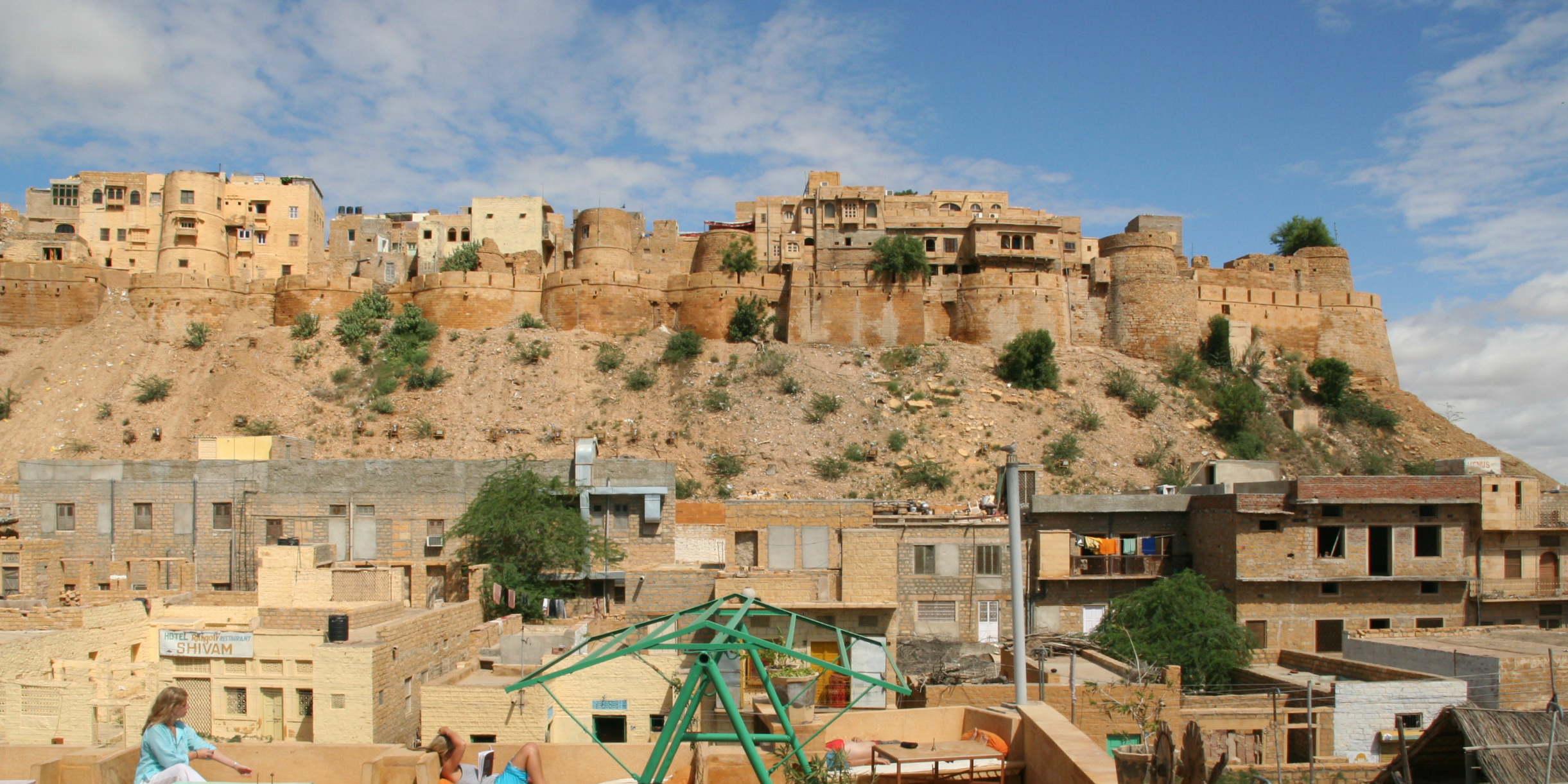 Traders line the platform, promising the “Arabian Nights” experience for just 350 Indian rupees (3,39 GBP) per day. They sell camel treks and “dune-bashing” jeep tours of the Sam Sand Dunes that lie over 40 kilometres miles from the city. Some even throw in a gala dinner to make the camel safari package more luxurious.

Cows with flapping necks and twisted horns sit in front of minibuses, leisurely sucking their tails as patient drivers wait for them to move.

Young boys with sun-bleached hair and neckerchiefs chase a rubber tire down the street. The sand whips up in waves around their bare feet and forces them to squint.

Passing a wall with a painted swastika, symbolizing its Sanskrit roots of “well-being”, I spend the evening gazing towards the walled golden city beyond. The fort was declared a UNESCO World Heritage Site in 2013.

The steep walls and layered ramparts seem to blend into the sand, as if by magic, if you stare at them for too long.

Passing the 60 feet rosewood gate, I enter the golden fort, aptly named “Sonar Quila” by local people. The Jali latticework of the stone screens conjures up the grandeur of the former imperial state, incongruous with the faded sign advertising “Vadilal icecream”.

The sandstone bricks lean in jaunty angles and tiny black bats hang in the crevasses. Pigeons pop their blue heads out of delicately carved holes in the balconies above. The uneven flagstones threaten to topple my ankles as I look up, distracted.

The narrow alleyways are filled with flapping sheets, announcing hotels with “hot and cold water”, and tours that are “touristic or non-touristic”. A tailor named Shree Shiv Textiles markets “fancy suiting and shirting” to potential customers. 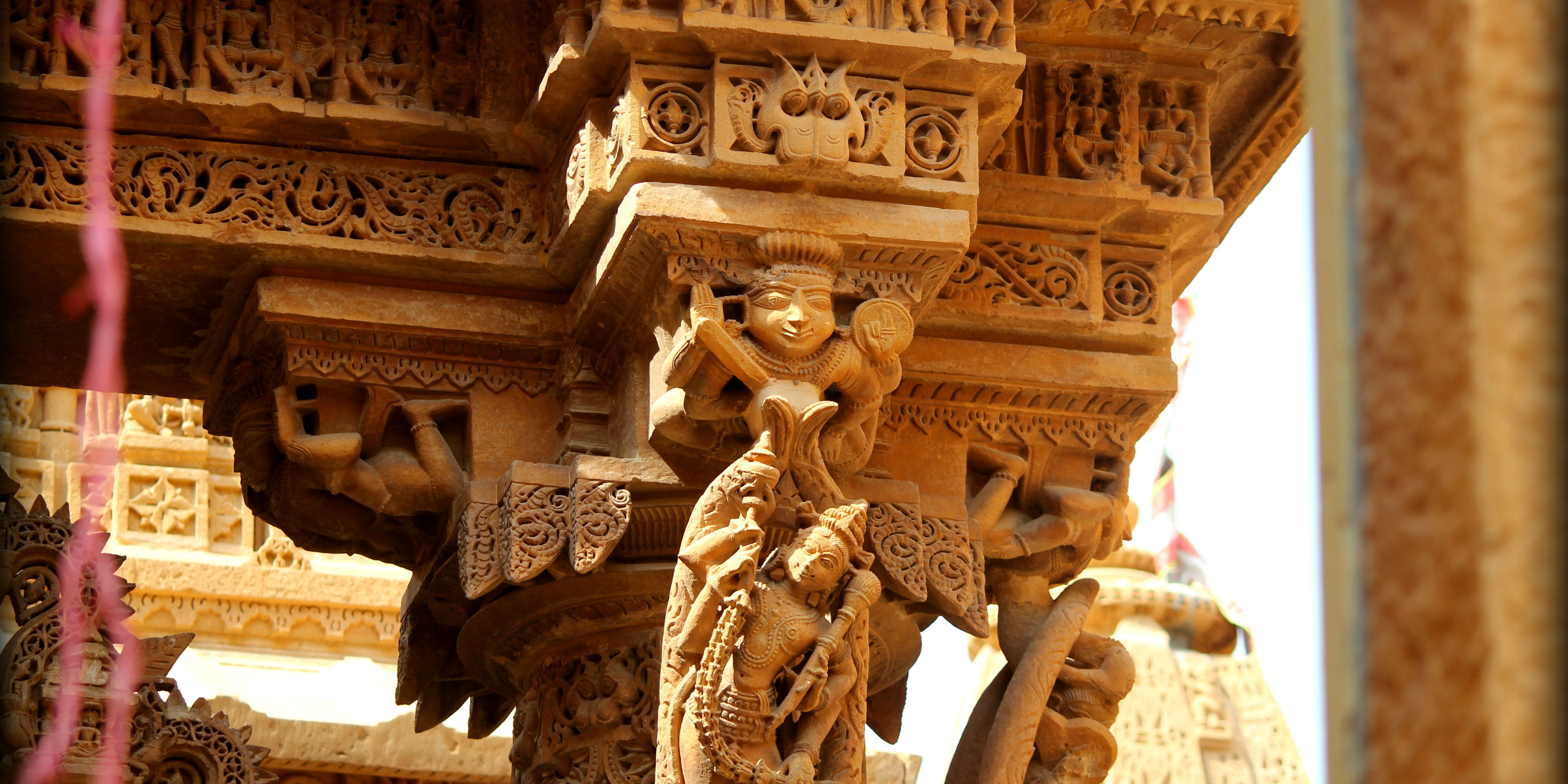 I walk through corridors connecting the seven Jain temples, carved in the traditional Dilwara style and depicting tusked animals and human figures. These temples are dedicated to hermits, or wise men, who lived there half a millennia before.

I stop at a haveli. The symmetrical carvings on the balcony and around the front door have weathered the sandstorms. These buildings were built by wealthy merchants, and a few are now museums. Others, like the Vyas haveli, continue to house the descendants of the original builder after six hundred years.

Around 4,000 people reside in the fort, making it the last living fort in India.

Toothless women wearing entire outfits made from a single pattern sit on flat cushions, gossiping as they sip filmy chai tea. Behind them, the pale stone steps are worn smooth by the feet of generations. 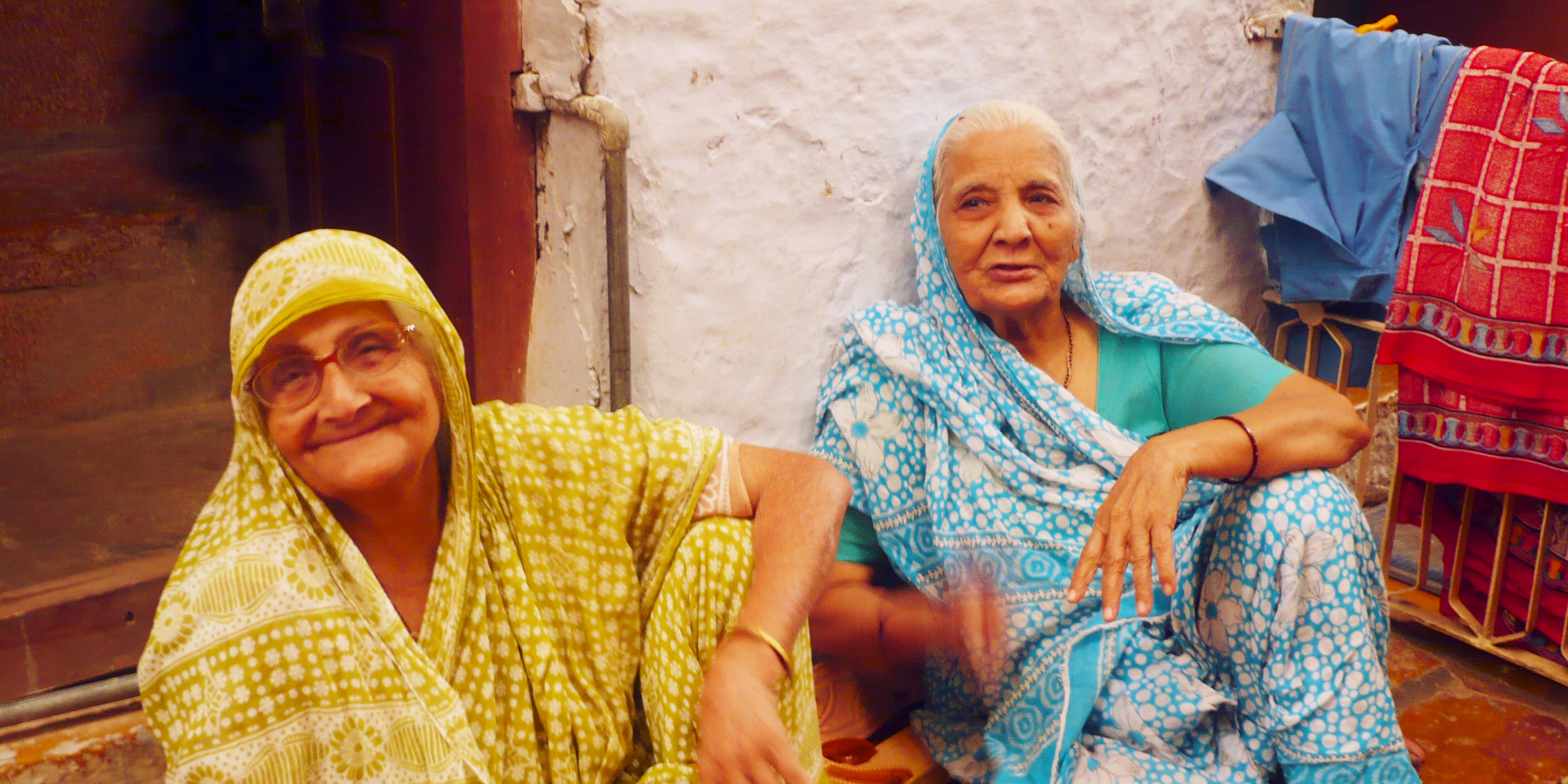 Leading me by the hand, one of the women takes me down into a dark cave that is lit by a single bulb. Embroidered silk and cotton glitter in the dimness, and an elephant wall hanging calls out to me. I sit on a flattened cushion, eating sticky gulab jamun with the jovial pair until a fair sum is agreed.

Outside, merchants selling handcrafted silver jewellery, pastel pashminas and leather goods are eager to show me their wares.

Many of these traders live elsewhere in Rajasthan, but congregate in the medieval fort between November to March to take advantage of the visiting tourists. 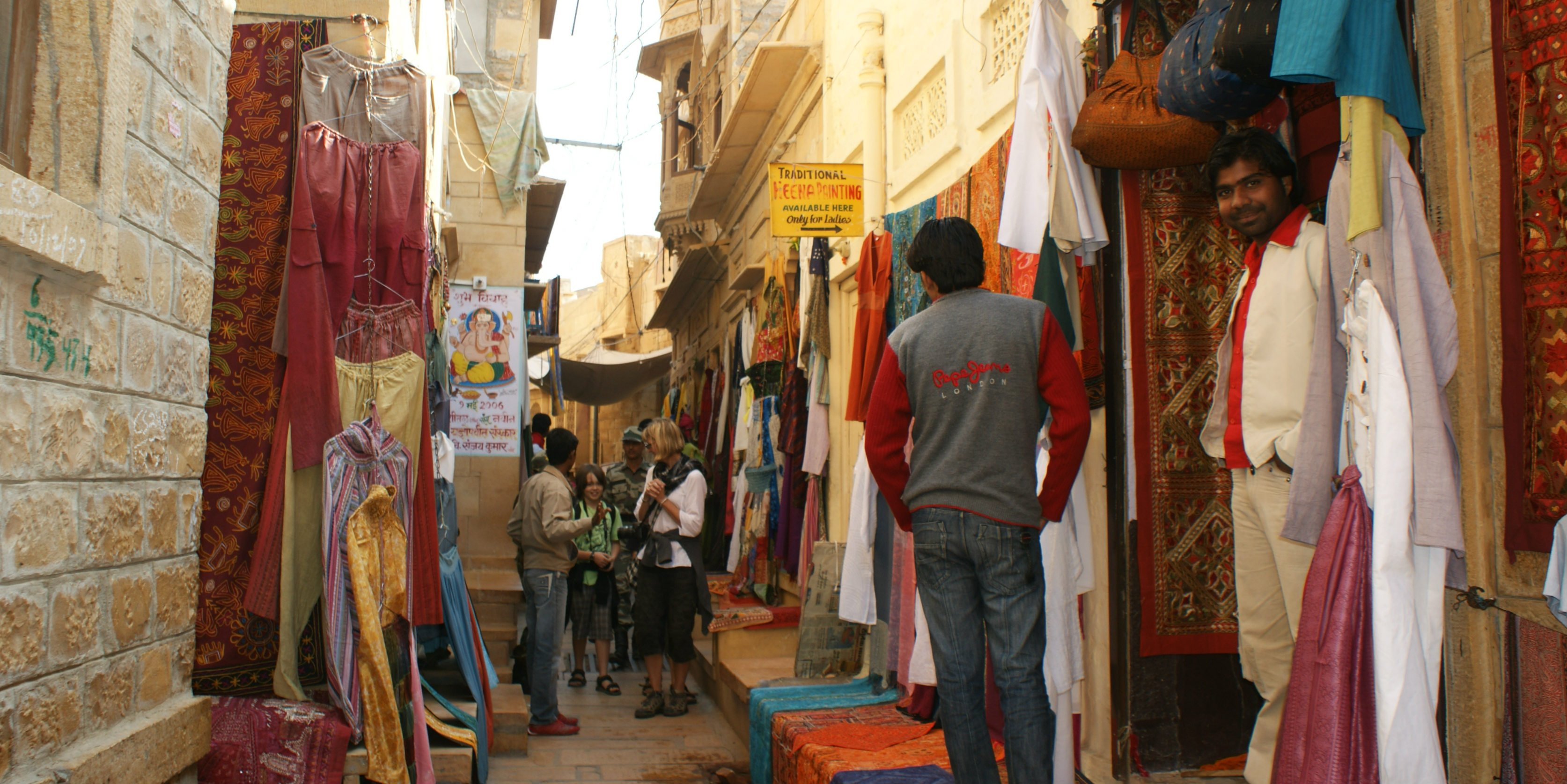 A Bengali hit and the subsequent rise in tourism

The fort of Jaisalmer was put on the map in the mid-1970s, when director Satyajit Ray filmed the Bengali movie Sonar Kella, meaning “The Golden Fortress”.

The film is based on the journey of a young boy named Mukul. Despite never having been there, the child draws the golden fort obsessively and claims to remember it from a past life. He recalls where precious jewels are hidden within the fort. The news attracts a band of crooks, and the characters journey through Rajasthan, capturing rich cinematography of the desert sands and golden fort.

The film won a handful of prestigious awards, including Best Screenplay in the 1975 National Film Awards in India. It extended its reach beyond Asia, though, and was nominated for Best Feature at the Chicago International Film Festival where it was played with subtitles.

The far reach of the movie thrust Rajasthan into the consciousness of many travellers, and it wasn’t long before thousands of tourists arrived in Jaisalmer to see the golden fort for themselves.

In response, the government organised a desert festival to celebrate the traditions of desert life. The annual festival is a pilgrimage of music and dance 44 miles into the Thar Desert.

Camels are dressed in colourful pom-poms and raced. There are bouts of tug of war, the longest moustache competition, and the title of “Maru-Shri” (Man of the Desert) is decided. Local musicians play traditional “been” instruments while turban tying contests commence.

The cost of tourism 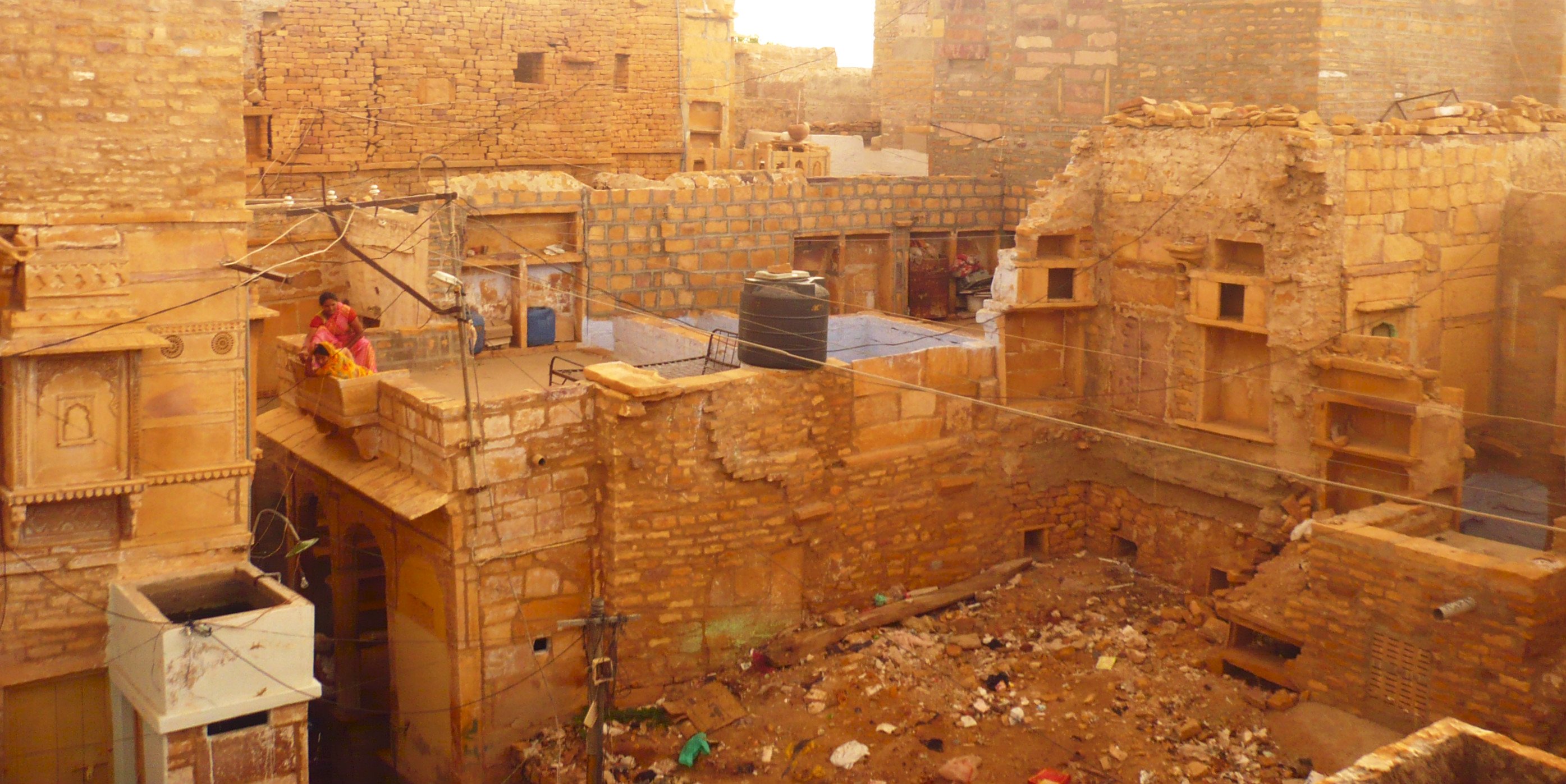 Despite enduring sandstorms and earthquakes for hundreds of years, in 2016 the fort suffered a major wall collapse that saw a 42 by 20 feet section destroyed. Water had seeped into the stone and weakened its structural integrity, causing deep cracks in the walls.

Living in the desert, irrigation should be a minor concern. However, the traditional ghut nali system that was able to distribute excess water to the four corners of the fort has been overwhelmed by the modernisation of the fort to cater for the rising numbers of tourists.

According to government estimates, over 189,000 litres of water is pumped into the city every day to supply hotels and restaurants with running water and flushing toilets. Inadequate draining remains an issue, in spite of recent attempts to introduce a new sewage system.

Calls to implement short-term conservation strategies have been proposed by UNESCO and other local bodies, but it appears time is quickly running out.

Ten years ago, Lonely Planet recommended that travellers do not stay in the fort since it was structurally unsafe.

Residents are concerned that they may be relocated and lose their livelihoods, and further unlicensed guesthouses and illegal construction has put more strain on the foundations of the fort. 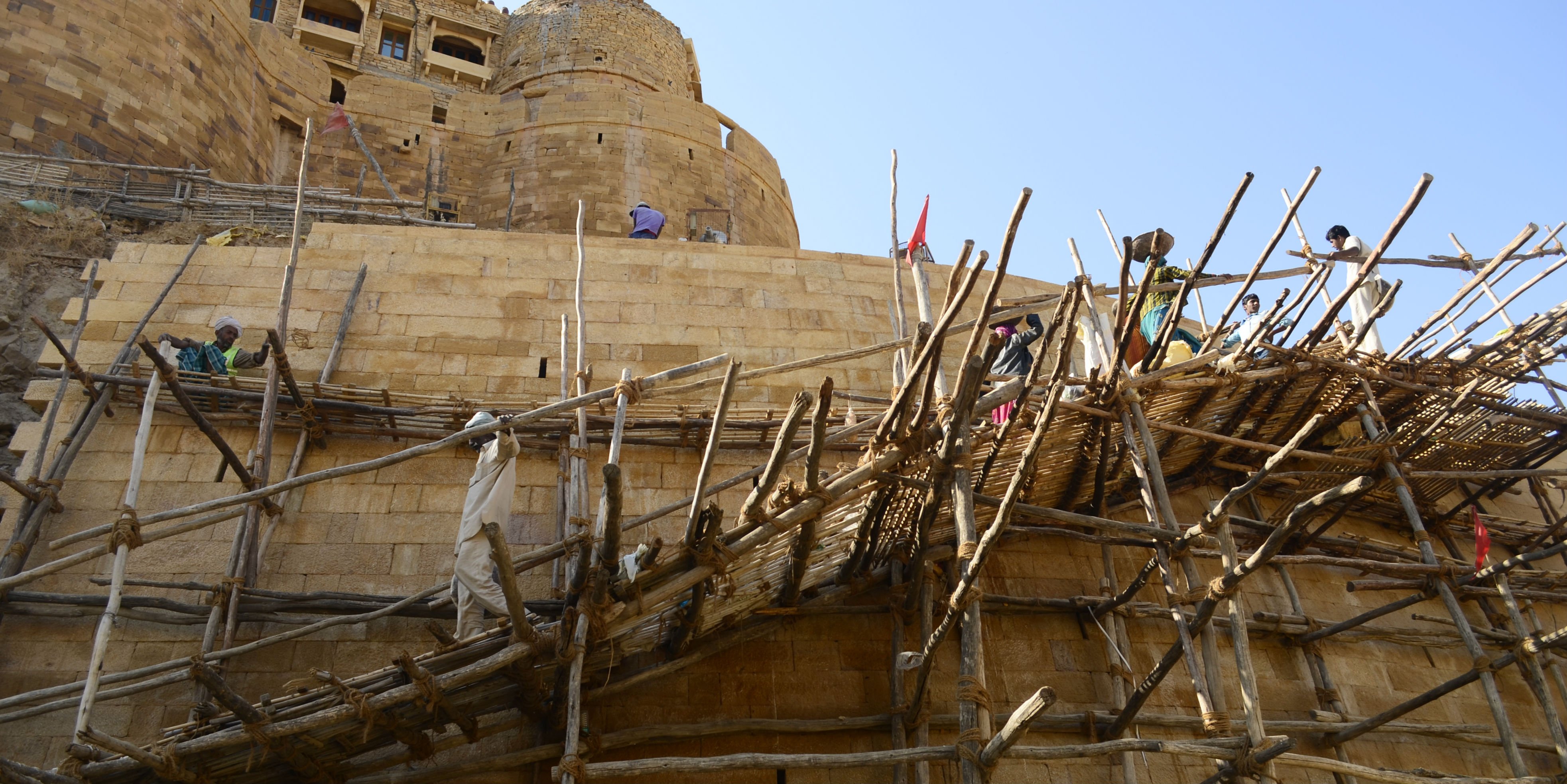 Disappearing into the dunes

The Jaisalmer Fort sits on a tectonic plate that is prone to intense tremors.

Jaisalmer has suffered significant earthquakes in the last twenty years, most noticeably a 7.7 and 5.3 magnitude earthquake in 2001 and 2009, in turn.

Although the fort has withstood such tremors before, now that the stone has been weakened by excessive water seepage, local people are worried that the fort is not as resistant as it once was.

In the aftermath of the most recent earthquake of 2009, 16 of the 99 bastions were damaged beyond repair. In total, 87 of the fort’s 469 structures have collapsed, and existent cracks are widening. 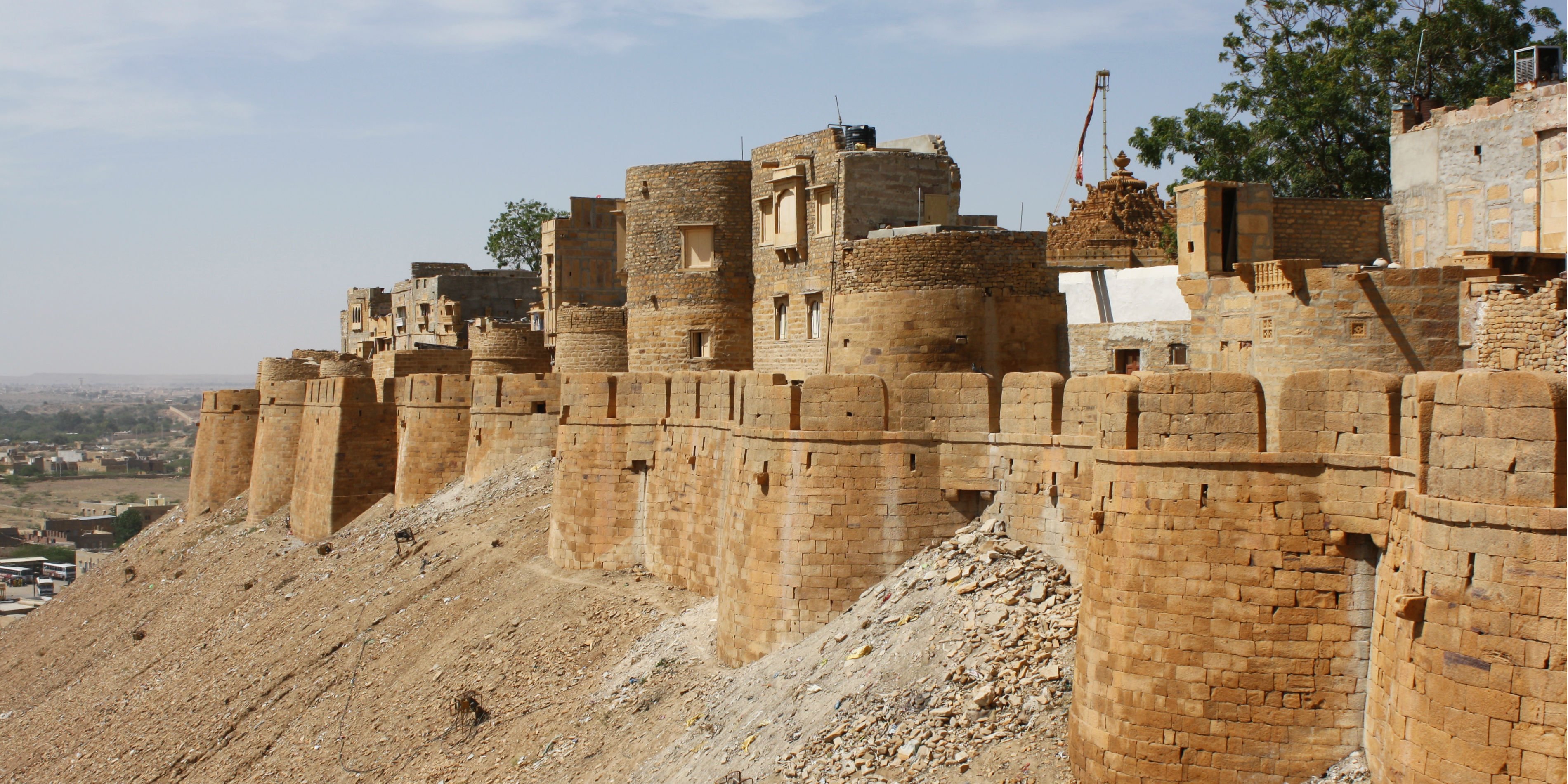 To add further complications, the fort was built on a weak foundation. Positioned on the Trikuta Hills, the weak sedimentary rock below is porous and seeps water.

With drainage systems choking, the fort is sinking.

Despite the government receiving support from the World Monuments Fund to enable the Archaeological Survey of India to manage all renovations, the fort continues to crumble.

Significant losses include Rani Ka Mahal (the Queen’s Palace) that collapsed in 1995, which controversially received a $100,000 donation by American Express for its renovation. 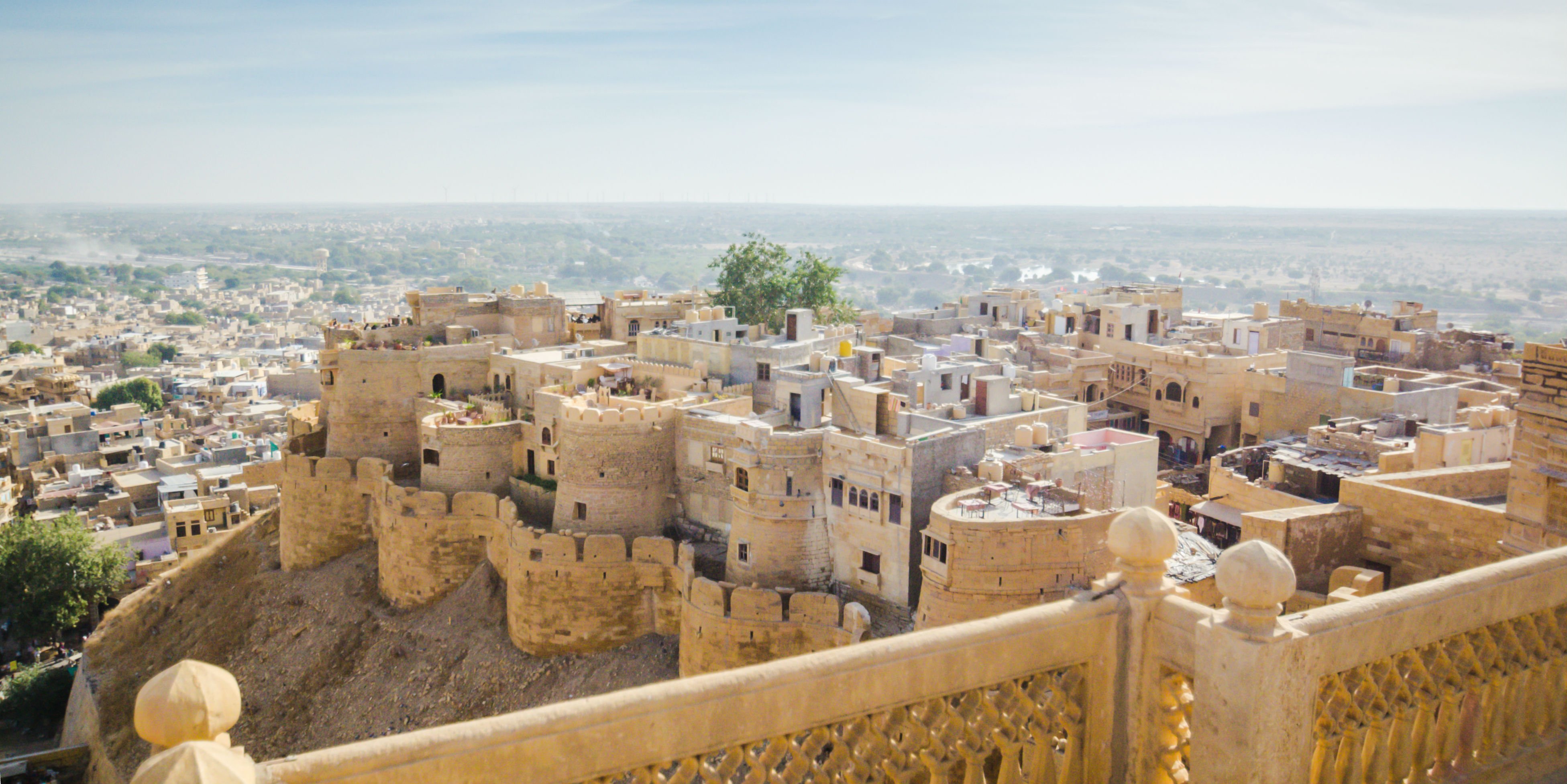 Furthermore, the fort’s UNESCO World Heritage status is now vulnerable as the site has not been able to preserve the colour of the golden sandstone, which has become dull.

There are almost 40 dilapidated buildings waiting to be repaired, and Jaisalmer has not been able to remedy the effects of water leakage that weaken the structural integrity of the fort.

Riding camels into the sunset is no longer viable

Concerns over animal welfare, given the recent backlash of consumers refusing to ride elephants, has brought the practice of riding camels into focus.

Although current research is limited, or simply linked to similar practices with horses and donkeys, travellers are now asking whether camel treks can be an ethical and sustainable activity.

Moreover, tour operators in Jaisalmer are now limited to a 45-kilometre trek into the Thar Desert due to tensions near the border with Pakistan. To travel further, tour guides must request permission from the police and government administration.

The 14-day treks across the desert are now a relic of the past, but hopefully, sustainable travel and responsible tourism practices will resume in its place.

If you would like to participate in one of GVI’s projects in India to help sustainable community development, contact a member of the GVI team for further details.